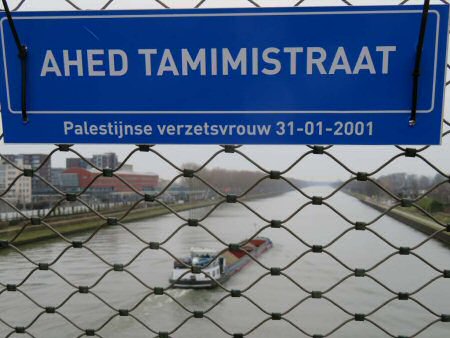 The activists said they sought to highlight the sentencing of Ahed, 17, a Palestinian teen activist sentenced to eight months at the Ofer military prison.

“For a small act of resistance against an Israeli soldier who was illegally in the yard of her house, she was sentenced to 8 months in prison and a hefty fine,” said MovementX and docP in a press release. “Her family members received similar punishments. On the same day, the Israeli soldier Azaria who had shot a Palestinian man in the head in 2016 who was already dying from a bullet wound, saw his sentence reduced from 8 to 9 months. The activists are outraged that the Dutch government so far did not not exercise significant pressure on Israel for Tamimi’s release.”

Ahed Tamimi, 17, has drawn international attention following her arrest after the Dec. 15 confrontation with an Israeli officer and a soldier outside her West Bank home of Nabi Saleh.

The incident was streamed live on Facebook by her mother and went viral. Tamimi and her mother, Nariman, were arrested a few days later.