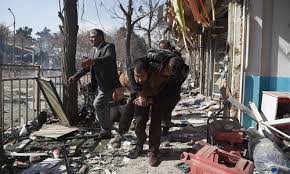 SANAA – At least 20 people including the bride were killed when an air strike by the Saudi-led coalition hit a wedding party in northern Yemen, health officials have said.

The dead were mostly women and children gathered in a tent set up for the wedding in the Bani Qayis district, according to Khaled al-Nadhri, the leading health official in the north-western Hajjah province.
Hospital chief Mohammed al-Sawmali said the groom and 45 other wounded people were brought to the local al-Jomhouri hospital.

Thirty of those injured were reported to be children, with some in critical condition having suffered severed limbs and shrapnel wounds.

Footage that emerged from the scene of the airstrike showed scattered body parts and a young boy in a green shirt hugging a man’s lifeless body, screaming and crying.

Health ministry spokesman Abdel-Hakim al-Kahlan said ambulances were initially unable to reach the site of the bombing for fear of subsequent airstrikes as the jets continued to fly overhead after the initial strike on Sunday.