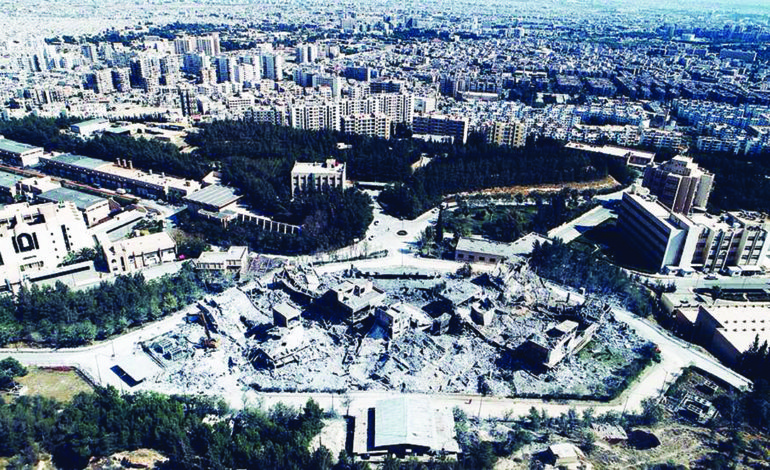 A photo taken Monday morning shows the Barzah Research and Development Center in Damascus after it was struck by coalition forces on Saturday, April 14

“Assad either didn’t carry out the chemical attack or he “is the dumbest dictator on the planet Earth.” -Sen. Rand Paul (R-KY)

DEARBORN — The U.S. and its European allies carried out airstrikes on Friday, April 13, in retaliation for a suspected but unconfirmed chemical attack on April 7 in the city of Douma in Syria — A direct act of opposition and intervention from the West against President Bashar al-Assad’s government.

Reuters reported that the United States, France and Britain launched 105 missiles, targeting what the Pentagon said were three chemical weapons facilities, including a research and development center in Damascus’ Barzeh district and two installations near Homs.

According to a BBC report, Syrian Assistant Foreign Minister Ayman Sousan “welcomed the OPCW delegation”, referring to the organization for the prohibition of chemical weapons.

“The work of the mission is in the interest of the Syrian state as it will uncover the lies, hypocrisy and the misinformation of the sides which had promoted the alleged use of chemical weapons,” Sousan said.

The same report stated that British Foreign Secretary Boris Johnson said the, “strikes in Syria were meant to signal that ‘enough is enough’ and their “primary purpose is to say no to the use of barbaric chemical weapons.”

The Syrian government has repeatedly denied claims that it launched a chemical attack on its people.

Bashar Jaafari, the Syrian envoy to the U.N., called the U.S., U.K. and France “liars, spoilers and hypocrites.” He added that these countries use the U.N. to their advantage, where they “pursue… [their] policy of interference and colonialism.”

“These offensive strikes against Syria are unconstitutional, illegal and reckless,” Amash wrote in a tweet April 13. “The next speaker of the House must reclaim congressional war powers as prescribed in Article I of the Constitution.”

The tweet also addressed House Speaker Paul Ryan (R-WI), saying he, “has completely abdicated one of his most important responsibilities.”

In another tweet, Amash said 15 Republicans and 73 Democrats signed a letter warning against offensive strikes against Syria without Congressional approval.

Sen. Rand Paul (R-KY) said Assad either didn’t carry out the attack or “is the dumbest dictator on the planet Earth.”

Nihad Awad, the executive director and co-founder of the Council on American-Islamic Relations (CAIR), a non-profit Muslim civil rights and advocacy organization, stated on Twitter, “Let’s be clear. Assad is war criminal & has to go. Trump is not helping the Syrian people. He is helping himself in this attack. Trump prevented Syrian refugees from coming the U.S., he only allowed 11 Syrian refugees in one year! The Syrian people deserve a long term solution.”

The AANews talked to some local Syrian Americans to get their thoughts about the U.S.-led strike.

“It is such a hard feeling living in a country that you call your own, knowing it’s destroying your homeland,” said Marah Humaideh, 18, an Arab American of Syrian descent and a student at Henry Ford College in Dearborn. “Am I against it? Absolutely. There are no excuses for striking a city and killing thousands of people, including women and children. There are 18-year-olds just like me who would have wished to see another day.”

“I do not believe the American government has launched a $100 million missiles strike just to reply to the chemical attacks against Syrians,” said Alaa Eddin AlChalabi, 25, a Syrian PhD student at the University of Ottawa. “I believe it is wrong in too many aspects. First, it’s a message to the Syrian government that it is not OK to use chemicals but fine otherwise. Secondly, the strike gives fascists a reason to continue what they call ‘fighting the Western imperialism’ and their dictatorship practices.”

“As a Syrian American, I am against it [the strike] because Trump gave Al Assad a warning a couple of days before he would strike Syria,” said a local college student who chose to remain anonymous. “So, basically the innocent were the ones who got affected mostly and not even Assad’s troops. Al Assad usually puts the soldiers that aren’t trained where the other countries would bomb and his troops would stay safe.”

The student added that it’s all a game.

“Only the innocents are the ones affected,” she said. “The government is just getting richer and the Syrians are the ones dying.”