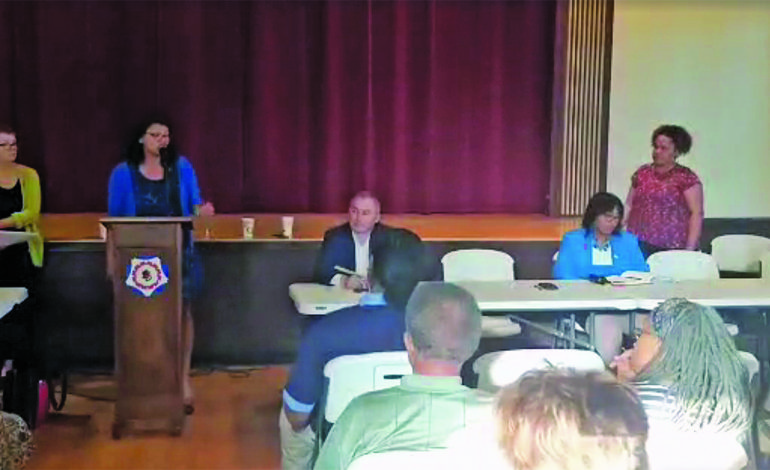 DETROIT – Democratic candidates for the 13th District participated in a forum on June 11 at Detroit’s North Rosedale Park Community House that focused primarily on the role charter schools play in uplifting Detroit’s youth and reducing poverty and crime.

The forum drew a sizable and passionate audience, many of whom explicitly backed particular favorites.

Recession, bankruptcy and corporate tax breaks are among the crises that have taken a toll on Michigan’s education system in the past decade. Plagued with droves of public schools forced to shut down, the few existing schools’ dilapidated infrastructure, underpaid teachers and underfunded classrooms; and with Detroit being the lowest-performing urban school district on national tests, according a to a 2009 Crain’s report, state legislators have come up with creative ways to boost its crumbling education system.

Many neighborhood public schools were closed, but charter schools funded by the private sector that offered unique learning experiences and high-tech classrooms seemed to be perfect alternatives and provided options to parents and encouraged healthy competition between charters and public schools, forcing them to innovate.

That was Gov. Engler’s idea when he signed a law in 1993 allowing charters schools to open up for business and be financially supported out of the same budget that funds public schools.

Today, many Detroiters attribute the city’s lingering educational downfall to an oversaturated charter school market that failed to produce quality performance among students, also forcing many of them to close.

Eighteen charters whose existing schools were at or below the district’s poor performance in 2011 expanded or opened new schools. A 2015 federal review of a charter school grant application found an “unreasonably high” number were among the worst-performing 5 percent of public schools in Michigan.

Proponents of charter schools — many of whom are minority and immigrant families — argue that many charters which meet or exceed state exam standards and offer unique academic, cultural and language learning options can be a better fit for some children and parents. Options are welcomed in educationally deserted neighborhoods.

Jones said charter schools have a place in Detroit and that all learning centers should get the same equitable treatment, making education more accessible. However, she’s a a strong proponent of uplifting public schools in part because her mother was a public school teacher.

Tlaib blasted the recent expansion of charter school districts, saying she was “very, very strongly” against it and touting her efforts at the State House.

Aside from Detroit, she pointed to the “complete dismantling” of the Inkster Public Schools district in 2013 that split students in four neighboring districts.

She also criticized both Republicans and Democrats for supporting charters schools and for allowing public money being used to fund cyber schools, which she said are getting paid for lunch money as public schools do, even while they don’t provide lunch.

Tlaib added that she helped lead the fight with the American Federation of Teachers to unionize a charter school academy in the Sixth State Congressional District, where she served from 2009 to 2014.

“It is our own party sitting there uplifting many of the charters schools and you won’t see me being one of them,” she said.

Her stance has always been true accountability on charter schools and criticized, she reiterated.

Tlaib also blasted Young for cosponsoring a tax incentive plan that gave Quicken Loans owner Dan Gilbert $618 million to fund four projects in Detroit, including building the tallest building in the city. That bill, she stressed, takes away $18 million of tax money that should be funding public schools.

Wild, whose wife is a public school teacher, said Detroit cannot be a world class city without strong public schools and stressed that he’d do everything in his power as a congressman to make it a “shining star” district again.

“I’ll do everything in Washington to bring back every nickel that I can to help our public schools and I’ll also work hand in hand with our city legislators to make sure that Detroit Public Schools get every dollar it can,” he said.

Young, touting that he created 11 laws in Michigan, said he has never voted for charter schools and never will.

He added that too many Detroit kids have to walk across the city to get an education because their neighborhood public school was underfunded and closed down, just like the nearest charter school did, because of poor student performance.

“Now we’ve got kids in these neighborhoods that are educational deserts and they have nowhere to be educated,” Young said. “That is fundamentally wrong — in the greatest country on earth, every child should have access to education.”

He added that teachers need pencils and books, not guns in the classroom; and to keep children safe, he advocated for the ban of AR-15s and the implementation of universal background checks on gun sales.

Jackson said she supports adequate and fair funding for all public schools and that she considered charters schools one and the same as public schools.

She said 54 percent of parents in Detroit have chosen to send their children to public schools, just like her mother chose for one of her children.

“I don’t believe that minority parents can’t think for themselves,” she said. “They can choose the model that is better for their child.”

Jackson stressed that although charter schools should still be held accountable to adhering to state education standards, offering options for low-income and working families was a good thing.

“To not have options is limiting our children,” she said.