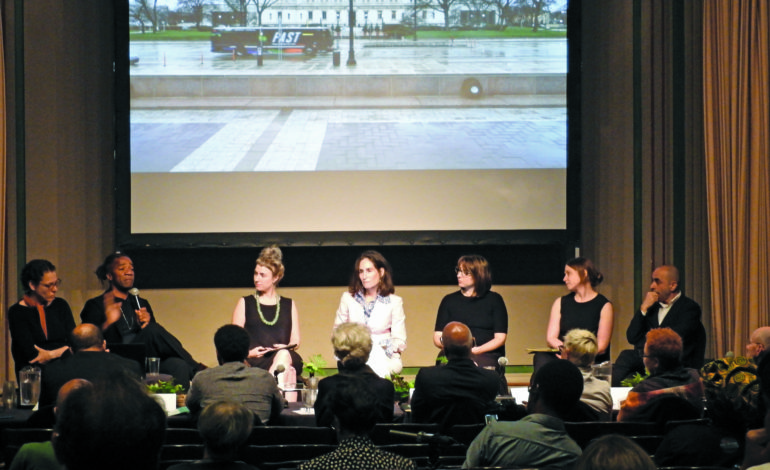 DETROIT — The Detroit Institute of Arts (DIA) and Midtown Cultural Connections launched an international design competition and invited the public for a series of presentations and interviews on June 13 and 14 in the DIA lecture hall.

The three-stage competition launched on April 1 and is part of a process to choose a landscape architecture and/or urban design team to enhance the DIA’s exterior campus also taking elements to physically connect the 12 surrounding arts and cultural institutions.

That competition included more than 44 designs, representing 10 countries and 22 cities. Eight teams were selected to advance as semi-finalists and have been asked to outline their approach to reimagine the DIA’s grounds and to improve the opportunities for public art and programming through 90-minute presentations.

The goal of this project was to realize the vision of a gathering place in Midtown Detroit welcoming everybody and establishing mediums between the arts and cultural institutions; fundamental emphasis was placed on how to engage institutions on sight.

“At first nobody in the community wanted to step forward,” said Sherry Dobbin, an architect and culteral director at the London-based Futurecity. “We had to understand that something was missing.”

Dobbin stressed the importance of identifying and reaching out to groups that were not represented and discussed a precedent case about the impact of appealing to what the people of the community want. She noted that so many people attended because they were involved.

“Suddenly, the community was represented,” she said. “Watching what those comments were, there was a sense of popularity from them.”

Dobbin added that the people involved are from diverse groups.

“All of a sudden, the community board went from seven people who were over the age of 70 to having 15 people from the ages of 15-70,” she said.

The team from the Oakland, Calif.-based Hood Design Studio gave an in-depth presentation on the relationship between a landscape department and the public space that acts as a prospect for the city.

Founder Walter Hood emphasized that a city street, a street that opens 24/7, encourages people to engage with inward work and possibility; it then opens up the challenges of those deep buildings that deal with how to bring natural life into the core of a building.

“The image of a building is one thing,” Hood said. “But its ability to specialize the volume of a public interior is actually more important.”

Above all, this program as a whole also focused on the public’s vision for creating a connected cultural campus.

Three finalists will be selected to design and amplify the project’s possibilities. The three firms will make public presentations on Jan. 23 at the DIA and the winning team will be announced in March.