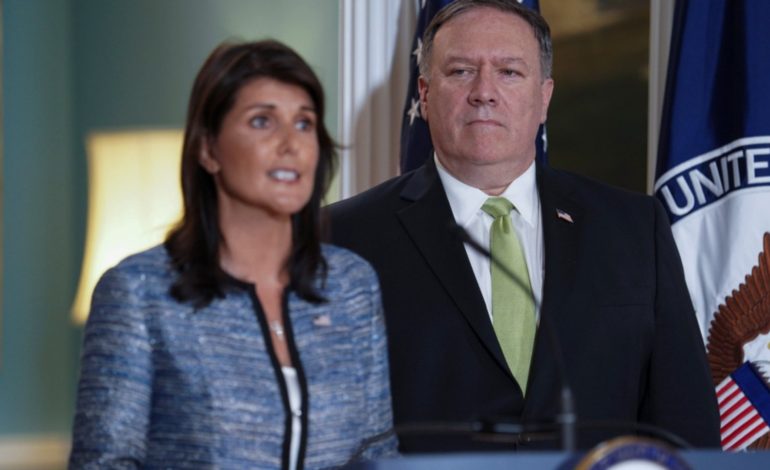 U.S. Ambassador to the U.N. Nikki Haley and Secretary of State Mike Pompeo announce America's quiting the U.N. Human Rights Council, at the Department of State in Washington, DC. - Reuters

WASHINGTON — The Trump administration withdrew from the U.N. Human Rights Council on Tuesday, accusing the body of hypocrisy and bias against Israel.

“For too long, the Human Rights Council has been a protector of human rights abusers and a cesspool of political bias,” Nikki Haley, the U.S. ambassador to the U.N., said Tuesday at the State Department in Washington. She said the decision was an affirmation of U.S. respect for human rights, a commitment that “does not allow us to remain a part of a hypocritical and self-serving organization that makes a mockery of human rights.” The 47-member Council, created in 2006 and based in Geneva, began its latest session on Monday with a broadside against President Trump’s immigration policy by the U.N.’s high commissioner for human rights, Zeid Ra’ad al-Hussein. He called the policy of separating children from parents illegally crossing the southern border of the U.S. “unconscionable.”

The Trump administration is under intense criticism from business groups, human rights organizations and lawmakers from both parties over the recently imposed policy.

The Council has also been a forum for criticism of Trump’s economic policies. In a report on the U.S. due to be submitted to the Human Rights Council this week, Philip Alston, the U.N.’s envoy on poverty, said the president’s tax overhaul “overwhelmingly benefited the wealthy and worsened inequality.”

While the timing was jarring, the U.S. withdrawal had been in the works for some time and reflects broader skepticism among conservatives toward it. National Security Adviser John Bolton had opposed the body’s creation when he was U.S. ambassador to the U.N. in 2006. Haley warned a year ago that the U.S. would pull out if the Council didn’t address what she saw as its bias toward Israel and the fact that many of its current members — they include China, Saudi Arabia and Egypt — have poor human rights records themselves.

“China is sorry to see the U.S. withdraw from the U.N. Human Rights Council,” Chinese Foreign Ministry spokesman Geng Shuang told a regular news briefing Wednesday in Beijing. “The Council is an important platform for all parties to conduct cooperation and communication on human rights issues.”

Haley took the lead on the decision Tuesday, as was made plain by the choreography of the announcement. Secretary of State Mike Pompeo delivered brief remarks before she spoke, praising Haley and leaving it to her to announce the withdrawal.

Condemning the move, Senator Chris Coons of Delaware, a Democrat who serves on the Foreign Relations Committee, said the decision “sends a clear message that the Trump administration does not intend to lead the world when it comes to human rights.”

The withdrawal was met with praise from Republican lawmakers, including Senator Lindsey Graham of South Carolina, and from Israeli Prime Minister Benjamin Netanyahu.

United Nations spokesman Stephane Dujarric said Secretary General Antonio Guterres “would have much preferred for the United States to remain” a member.

Even some critics of the Human Rights Council have called for continuing to push for a revamping of the body rather than quitting it. They argue that nations championing human rights are better able to counter members with poor track records by remaining involved with the body.

On the opening day of the Council’s current session, British Foreign Secretary Boris Johnson criticized the body’s perennial agenda item dedicated to Israeli and the Palestinian territories, calling it “damaging to the cause of peace.” Nonetheless, he said the U.K. wasn’t “blind to the value of this Council.”

The Council is scheduled to discuss Israel and the Palestinian territories on July 2, according to its agenda.