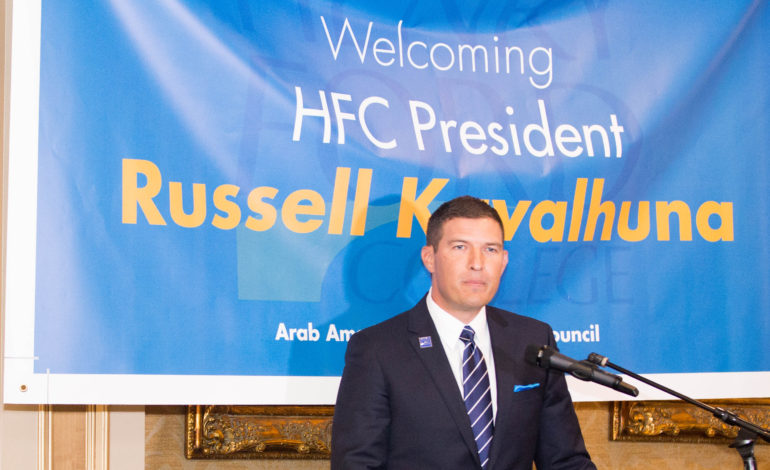 Osama Siblani, publisher of The Arab American News, gave the opening remarks at the event, welcoming Kavalhuna and his family, and offering the support of the Arab American community due to the challenges community education faces.

“Mr. Russell Kavalhuna has the knowledge, the commitment and the team behind him to lead Henry Ford College to it’s brightest future,” Siblani said. “The Arab American community is very committed to education. We strongly believe that education is at the roots of a successful society.”

Dearborn Board of Education Trustee Mary Lane, who also spoke at the event, said she’s read reports that education institutions may fail in the coming years.

“We are in a unique time in our history,” she said. “There are many stresses and there is much scrutiny on higher education. There are approximately 4,800 higher educational institutions in America that serve 21 million people, so it’s an important time. We entrust our future to President Kavalhuna to make sure we’re a better place.”

“Sometimes higher education needs to have a spotlight put on it,” President Kavalhuna told the AANews. “No one debates whether there’s quality at Henry Ford College, it’s just that some people don’t realize that we have that quality. So my plan is to very vigorously get to the community members that need to hear about it.”

The HFC Board of Trustees appointed John Satkowski as interim president while interviewing for the position. Kavalhuna’s hire was announced in March. He officially took over as president of HFC on July 1.

“I truly believe the best leaders of us do give an opportunity for the talented people around them to make use of those talents, not micromanage those people,” Kavalhuna said, describing his leadership style.

He also said that his long road before arriving at HFC was, “fueled by passion for education and public service.”

Kavalhuna said he relates to the Dearborn community through his own background as the child of immigrants, his father and grandfather, who came to the United States in search of a better life through opportunity for work and education.

“What I have seen in this community that is so valuable is something that’s been instilled in me from my father, who came from Brazil and really didn’t have enough money to have a house,” he said. “Communities that have people who value that opportunity for education as a method for societal growth, they happen to be more diverse, they happen to be more accepting of different viewpoints.”

Kavalhuna and his family are currently relocating to the Dearborn area from Portage, Michigan.

“I am excited to be in Dearborn,” he said. “[HFC] is a public institution and I want to be a part of the community.”

Courtney Kavalhuna said she is a stay-at-home mother for their two young children.

“The future, I hope,” Kavalhuna said, “holds the opportunity for Henry Ford Community College to expand what it means to Dearborn and the entire region.”