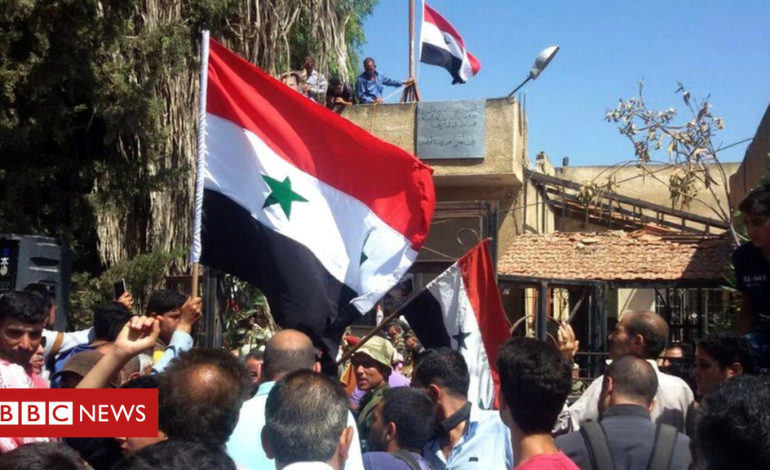 Syrian government forces are retaking control of the rebel-held part of Deraa, the birthplace of the revolt against President Bashar al-Assad.

AMMAN/BEIRUT — The Syrian government raised the national flag on Thursday over areas of Deraa city that have been in rebel hands for years, a major victory for President Bashar al-Assad in the birthplace of the revolt against his rule.

Syrian state television said the army hoisted the flag near the post office, the only government building in the portion of the city that had been held by rebels since the early days of the revolt that began there in 2011 with large protests.

Government forces backed by Russian air strikes have recovered swathes of Deraa province in the last three weeks, advancing unopposed by Assad’s Western and regional foes into the strategically vital region near Jordan and Israel.

It marks another milestone in Assad’s efforts to recover control of Syria, where civil war is estimated to have killed hundreds of thousands of people and driven some 11 million people from their homes. The Syrian Army is entering Deraa.

The campaign in the southwest is now expected to target rebel-held enclaves at the frontier with the Israeli-occupied Golan Heights. Israel signaled it would not impede the offensive.

With critical help from Russia and Iran, Assad has now recovered most of Syria. Anti-Assad rebels still control a chunk of the northwest, while the northeast and a large chunk of the east are controlled by Kurdish-led militia.

As Assad pursues military victory, there appears to be little hope of a negotiated peace which Western governments say is needed to bring stability and encourage refugees to return.

A senior Russian military delegation entered the rebel-held area of the city on Thursday and began negotiations over its handover to state rule, rebel officials and a witness said.

A rebel official told Reuters negotiations were proceeding smoothly, with the Russians so far abiding by the terms of the deal under which rebels would hand over weapons, and fighters who do not wish to live under state rule would be evacuated.

“Everyone is committed to the agreements,” said rebel official Abu Jihad, adding rebels had already begun since late Wednesday handing over their heavy weapons. A Syrian army soldier stands next to a Syrian flag in Umm al-Mayazen, in the countryside of Deraa, Syria, July 10, 2018. REUTERS

Two armored vehicles with senior Russian officers entered the devastated old city and began talks with commanders from the Free Syrian Army (FSA) on implementing the terms of the deal.

One rebel official said fighters hoped the Russians would keep a pledge to maintain a permanent Russian military police presence to protect civilians and former rebels who stay.

The southern rebels were once armed as part of an aid program run by the U.S. Central Intelligence Agency and backed by Assad’s regional foes, including Saudi Arabia. The United States, which shut down the program last year, told the rebels not to expect its military aid as the southern offensive began.

WHO seeks access to Syrians dying from heat, disease in south

The World Health Organization (WHO) in Geneva called on Thursday for access to 210,000 displaced Syrians who have fled fighting in southern Syria and are in urgent need of medicines and health services, including some injured requiring evacuation.

With temperatures soaring to up to 45 degrees Celsius (113°F), at least 15 Syrians, including 12 children, have died in the past week due to dehydration and diseases linked to contaminated water, the U.N. health agency said in a statement.

Three out of four public hospitals and health centers in Deraa and Quneitra are closed or only partially functioning, it said.

“We call on all parties to open the door to people in southern Syria and allow the safe delivery of medicines and medical items they need, and to grant severely injured patients safe passage to hospitals outside the area that can save their lives.”