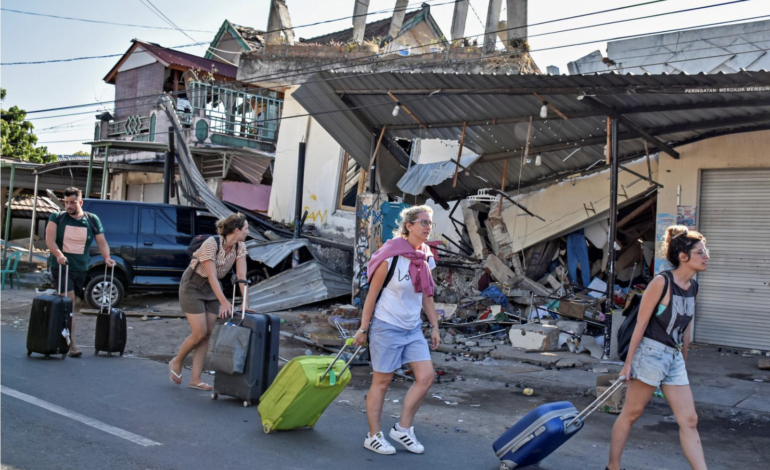 Foreign tourists pull their suitcases as they walk past damaged buildings following a strong earthquake in Pemenang, North Lombok, Indonesia August 6, 2018 in this photo taken by Antara Foto. Antara Foto/Ahmad Subaidi/ via REUTERS

TANJUNG, Indonesia— An Indonesian Island in Lombok was hit with its third significant earthquake in just over a week on Thursday. The official death toll from one of the earlier quakes was 300.

The latest quake, a strong aftershock that measured a magnitude 5.9 by the U.S. Geological Survey, damaged many buildings and caused landslides and injuries. Indonesia’s geological agency said it did not have the potential to cause a tsunami because it was centered in the northwest of the island.

Wiranto, Indonesia’s top security minister, said the death toll from Sunday’s magnitude 7.0 quake rose to 319. The announcement came after an inter-agency meeting was called to resolve figures from different agencies that were vastly dissimilar.

Grieving relatives buried their dead and medics tended to people whose injuries hadn’t yet been treated in the 24 hours since the quake. The Red Cross said it focused relief efforts on an estimated 20,000 people who hadn’t yet received assistance.

In Kopang Daya village in the hard-hit Tanjung district of north Lombok, a distraught family buried their 13-year-old daughter, who was hit by a collapsing wall and then trampled by a stampede of students at her Islamic boarding school.

“She was praying when the earthquake happened,” said her uncle. “She was trying to get out, but she got hit by a wall and fell down. Children were running out from the building in panic and she was stepped on by her friends.”

Thousands of homes were damaged or destroyed in Sunday’s quake and now more than 150,000 people are left homeless. The earlier earthquakes also weakened buildings already susceptible to collapse with cracks in the walls and roofs.

“People are always saying they need water and tarps,” said Indonesian Red Cross spokesman Arifin Hadi. He said the agency sent 20 water trucks to five remote areas, including one village of about 1,200 households.

He also said they’re continuing to look for people with untreated injuries.

In Kopang Daya, injured villagers didn’t get their first proper treatment until Thursday when medics arrived with a portable X-ray and other supplies.

Indonesia is prone to earthquakes because of its location on the “Ring of Fire”, an arc of volcanoes and fault lines in the Pacific Basin. In December 2004, a massive magnitude 9.1 earthquake off Sumatra triggered a tsunami that killed 230,000 people in 12 countries.