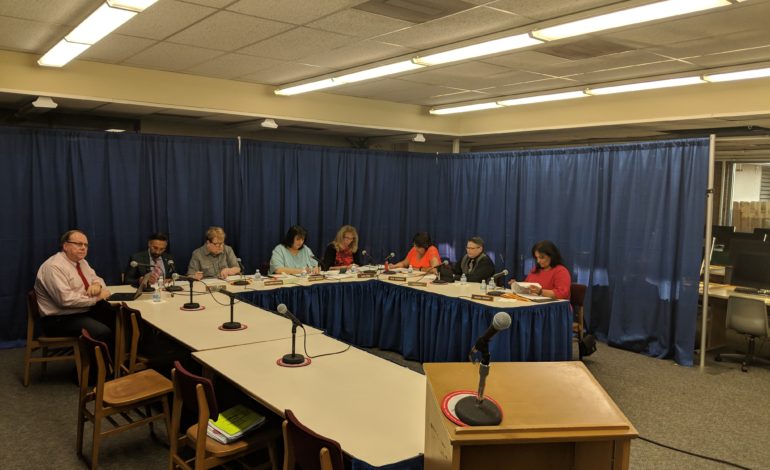 A Crestwood School Board meeting, where Mohammed Janny demanded better communication with from the administration, August 13 - Photo by The AANews

Janny said his 15-year-old daughter Fatima was diagnosed by a medical doctor with autism spectrum disorder in August of 2016 and that the family immediately notified the school.

He said his daughter struggles with focus and “has the mind of an 8 or 9-year-old.” But that she excels with technology.

“My daughter’s been getting special needs [services] through the school district,” he said. “Or at least so I thought.”

The email, sent to more than a dozen parents, consisted of paragraphs of new requirements and Pratt’s disappointments in her eighth grade special needs students at Riverside since her arrival.

“Many of you know that I have come back to Riverside from working at Hillcrest Elementary for the past four years,” the email said. “I LOVE the elementary aged students as they are typically very eager to learn and love getting the extra adult attention/support. I’ve been unpleasantly surprised by the reactions and lack of acceptance of help by many of the eighth graders.”

The email continued to point out that Pratt’s co-teachers, “Mrs. Gorski, Mr. McFarland, Ms. Anastasopoulus, Mrs. C-B” encouraged her to remember that she’s doing “way more work than the kids are” and that the children need to learn to be more responsible.

She also stated in the email that support staff and the administration have told her many times, “Every student has a right to fail.”

“They see how frustrating it is for me to make copy after copy and accommodations after accommodations for students to just lose, throw away and generally disregard the help I’m trying to give them,” Pratt said of her colleagues and support staff in the email.

The email also warned that Pratt will discontinue many accommodations for her special-needs students and that if students don’t meet the mark, they would fail and have to repeat their classes.

“I read this and I was livid,” Janny said.

He said he found the email unprofessional and that what disheartened him most was Pratt’s complaints about putting time and effort into her job with the eighth grade children in her class, comparing them to younger students she used to teach.

He subsequently emailed Pratt with his concerns and received a short response from her that didn’t address any of those concerns. He then sent the email thread to the school board, which did not respond at all until he attended a school board meeting.

Janny said that at the meeting, he made it clear that he no longer wanted Fatima in Pratt’s classroom and that the board seemed upset that Pratt had sent out such an email without prior approval. However, he said it took approximately two months and much prodding on his own part to finally get his daughter into a new class.

He added that Pratt has been sent by Crestwood Schools to get more training in special needs education.

Paige Grudziem, a support coordinator for All Well Being Services, has been working with the Janny family. She said the Family Support Subsidy in Wayne County is meant to help families with children with specific disabilities, including autism.

Janny is currently unemployed because he’s recovering from open heart surgery. He applied for the subsidy, but said the school sabotaged his chances of getting it by neglecting to diagnose Fatima with autism through its disabilities testing. Rather, she was diagnosed as “Otherwise Health Impaired.”

“To get this subsidy, you have to have school documentation showing that your child has either a severe intellectual disability or autism,” Grudziem said.

Janny said Menhem Aouad, director of special services at Crestwood, sent Fatima’s evaluation to the Wayne County Mental Health Authority, stating that she didn’t meet the criteria for the subsidy.

He also said in his many attempts to resolve this issue, he got very little contact or effort from any school officials, though he was following the proper protocol of communication.

During a meeting with Aouad on Aug. 6, after he appeared at another school board meeting to gain the board’s attention about the matter, Janny was told Fatima would be re-tested by the school, this time specifically for autism spectrum disorder, with new evaluators.

He said during the meeting he asked if Aouad was implying, by asserting his daughter would be evaluated with a “clean slate”, that prior IEPs could have been tainted by personal biases from the previous evaluators who knew her. Janny said Aouad refused to respond to the question.

“In the medical section of the IEP,” Janny said, “it says Fatima has a medical diagnosis of ADHD and autism spectrum disorder.”

Aouad told The AANews that, generally speaking, when students come to Crestwood with a medical diagnosis, the school “considers the student’s functioning” and may make a decision based on their students needs that may conflict with other diagnoses due to “difference in opinion.”

“I feel our staff is competent,” he said.

Aouad also said testing at Crestwood avoids focusing on earlier labels and diagnoses, but instead gathers information relevant to time spent in school.

“We look at all of the information together, rather than ‘What are we going to call the kid?’” he said.

“The school does a whole set of evaluations for a child with disabilities,” Grudziem said. “Based on their evaluations before they do an individualized education plan (IEP) and then based on that the school kind of does their own label for what the child’s needs are and what their disabilities are.

“In certain cases the school will say that a child has one thing, when medically the child is diagnosed with something different.”

Grudziem said when that happens, families are unable to submit the proper school-based documentation to be approved for the subsidy.

“When a family really needs some financial assistance to help with the care of a child with disabilities, they can miss out when the schools do their own thing,” she said. “And it doesn’t match.”

She also said that other benefits can be affected by discrepancies in documentation, which cause doubt in the original medical diagnosis.

“It can put their other benefits at risk,” she said.

Janny said he’s frustrated with the system that incorrectly diagnosed his daughter and now questions the quality of Fatima’s education at Riverside.

“What really gets me is they told me the school districts recognize their own diagnosis based on their own testing and don’t really take into consideration what the medical doctors diagnose,” he said. “They need to explain to me how they can override a medical doctor; I don’t get that.”