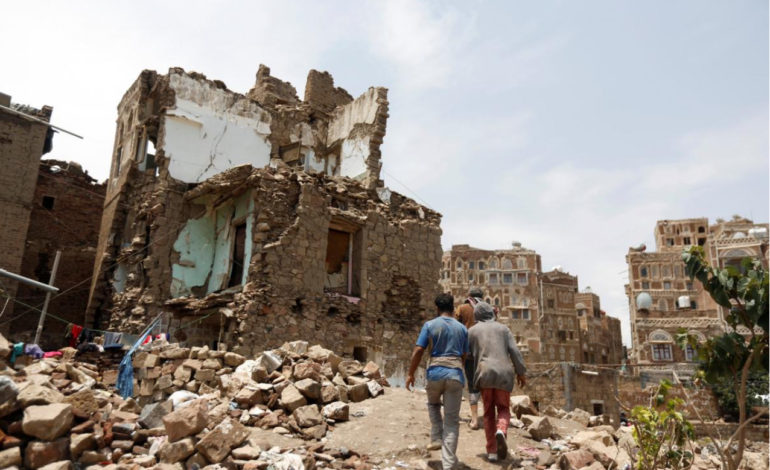 People walk past a house destroyed by an air strike in the old quarter of Sanaa, Yemen August 8, 2018. REUTERS

Air strikes by the Saudi-led coalition in the war in Yemen have caused heavy civilian casualties and some may amount to war crimes, U.N. human rights experts said on Tuesday.

The experts’ panel also said that fighters of the Houthi group had fired missiles into Saudi Arabia and shelled the Yemeni city of Taiz. It accused them of committing torture and deploying child soldiers, both war crimes.

Saudi Arabia is leading a Western-backed alliance of Arab states trying to restore the internationally recognized government of Yemeni President Abd-Rabbu Mansour Hadi, ousted from the capital Sanaa by the Houthis in 2015.The Houthis are backed by Iran.

The experts said they did not examine the United States and Britain, who supply weapons and intelligence to the alliance, or Iranian support for the Houthis but other U.N. bodies were doing so. They urged all states to restrict arms sales to help end the war.

“I think it fair to say, that of those parties that we have investigated — and we have not been able to look at for example al-Qaeda and Daesh (ISIS) who are also involved in Yemen — of those parties, none have clean hands,” panel member Charles Garraway told a news conference.

The report to the U.N. Human Rights Council was the first United Nations investigation into possible war crimes in Yemen although international human rights groups have regularly documented abuses. It was released ahead of U.N. peace talks between Hadi’s government and Houthis scheduled for Sept. 6 in Geneva.

More than 10,000 people have been killed in the war in Yemen and 8.4 million are on the brink of famine, the panel said.