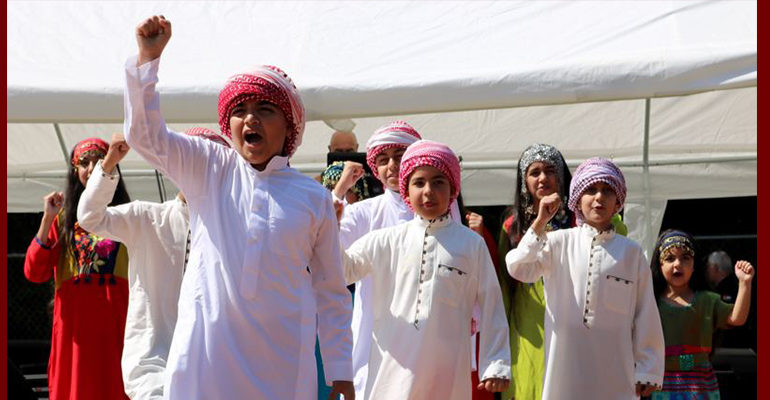 Refugee children from Iraq performing a dance known as “Chobi”. - Photos by the Portland Tribune

PORTLAND, Oregon — From Algeria to Yemen to Portland, Oregon, it takes a big, big tent at the festival to welcome everyone who’s a part of the Arabic culture.

Expats, immigrants and tabbouleh lovers from all over gathered for the Arab Mahrajan Festival on Saturday, Sept. 1 from 11 a.m. to 7 p.m. at Oaks Amusement Park in Southeast Portland.

“Part of it is getting the Arab American community together on a secular basis,” explained organizer Rima Ghandour and “part of it is to shatter stereotypes and to introduce people to the hospitality of the Arab culture.”

Ghandour is president of the Arab American Cultural Center of Oregon, which has hosted the festival for the last eight years.

She emigrated from Lebanon when she was 18 in order to go to college and now owns and operates a law firm in downtown Portland. Ghandour said many of the AACCO board members didn’t even know each other five years ago.

“You can stop anyone and they will be very excited to tell you about their culture,” added Said Fakih, another board member who runs the Sesame Donuts chain.

“When we start dancing, don’t be shy!” he said with a wag of his red-velvet fez.

Incurious Westerners may not know that the word Arab generally refers to the Arabic language, which has roughly 450 million speakers, as well as members of the ethnic group whose mother tongue is Arabic. The terms Arab and Muslim are not interchangeable — and a quick glance at a map shows that the majority of Arabs do not live in the Middle East.

At the festival, guests chowed down on food, perused the fine wares and clothing sold by some of the 30-plus vendors and enjoyed traditional and innovative music and dance. A vendor selling Chicken Shawarma among a variety of Arabic food that was offered at the festival. – Photo by the Portland Tribune

In a booth not far from the main stage, Muhyiddin Sultan pressed nib to paper, inscribing words like “peace” and “devotion” in Arabic.

But even as his hand produced the beautiful dips and curlicues, the Palestine native explained that calligraphy is an art that takes a lifetime to master.

“It’s not easy,” he said. “People think I’m a calligrapher — I feel I’m not. I’m still learning every day. If there were no Koran, there would be no Arabic.” Muhyiddin Sulan, a Palestinian American, says that calligraphy is a skill that takes a lifetime to master. – Photo by the Portland Tribune

While the festival is primarily about fun, it’s also a reminder that not everyone emigrates voluntarily.

A group of children, aged 6 to 13, performed a traditional dance called “Zhobi.”

Afterward, they explained they were refugees who have gone from living in Baghdad to Beaverton and Portland. Though they’ve traveled thousands of miles to leave Iraq, the link between their grandfathers and cousins has kept the group together. Said Fakih greets JoAnn hardest, a candidate for Portland City Council who said that people are very open and friendly at the festival. Photo by the Portland Tribune

“It’s dangerous,” said a girl named Hajir, 10, speaking about her home country. “We still love it because that’s where we were born.”

Still, the kids were all smiles during an interview with a reporter.

A youngster named Mustafa said his favorite part of the dance was “when we got to run.”

– By Zane Sparling, a reporter for the Portland Tribune. This article appeared first at: https://pamplinmedia.com