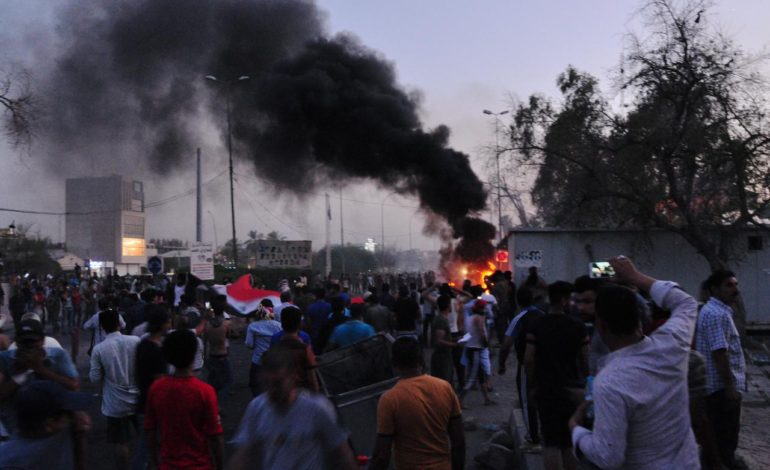 Protesters near the main provincial government building because of the water pollution and poor services in Basra, Iraq August 31 - Reuters

BASRA, Iraq — On Thursday, hundreds of people took to the streets of Iraq’s southern oil city Basra for a fourth day of violent protests, where residents, angry over the neglect of their city’s collapsing infrastructure, set fire to political offices.

Ten demonstrators have been killed in clashes with security forces and dozens injured since a wave of protests began on Monday. Tens of security forces members have also been injured, some by a hand grenade, health and security officials said.

Protesters targeted several provincial government buildings on Thursday, setting the headquarters of the local government on fire, and blocked main roads in the city center.

A protester died on Thursday night from burns sustained during the torching of the government headquarters, health and security sources said.

People attacked the offices of the state-run Iraqiya TV and set fire to the headquarters of the ruling Dawa Party, the Supreme Islamic Council and the Badr Organization, whose leaders are all vying to form Iraq’s ruling coalition. Two more protesters died during those attacks, local security and health sources said.

Protesters also set fire to the offices of a powerful Shi’a militia, Asaib Ahl al-Haq, and those of the Hikma Movement about 100 km (60 miles) north of Basra, and stormed the house of the acting head of the provincial council.

The provincial government headquarters was engulfed in flames, local police and military sources said. No protesters were near the building when the fire broke out in the afternoon, they said

Basra security officials announced a curfew from 10:30 p.m. to help quell the protests.

Residents in Basra, a city of more than 2 million people, say the water supply has become contaminated with salt.

A Health Ministry spokesman told a news conference in Baghdad that 6,280 people had been recently hospitalized with diarrhea because of the oversalinated water.

Public anger has grown at a time when politicians are struggling to form a government after an inconclusive parliamentary election in May. Residents of the south complain of decades of neglect in the region that produces the bulk of Iraq’s oil wealth.