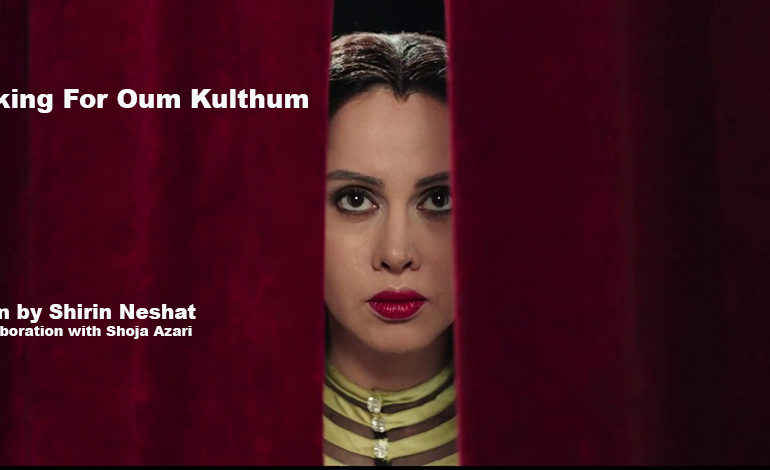 Shirin Neshat’s “Looking for Oum Kulthum” tells of an Iranian artist’s effort at making a film on the life and career of the late Egyptian legendary singer. Though the project was made with pure intentions, it has been met with distaste and skepticism from the Arab world.

A main criticism of the film is Neshat’s role as director, since this is an Arabic film and she does not speak the language nor relate to the Arab identity.

“Oum Kulthum was known in Iran, very well known,” Neshat told TRTWorld in response to the criticism. “In fact, my parents listened to her regularly. I was a little too young, but I remember that even in the long bus rides across the country hours long that they would play the music of Oum Kulthum. Because the south of Iran is also Arabic speaking and there are a lot of people who knew her extremely well. So she was not an unknown name to us.”

Looking for Oum Kulthum: A documentary film about the legendary Egyptian singer by an Iranian artist Shirin Neshat.

Critics have also claimed the film contains multiple inaccuracies in regards to Oum Kulthum’s life, since Neshat made the decision to illustrate a story from her own perspective. It has been slammed for featuring a 1914 women’s protest in Egypt that never actually happened, since the first women’s protest known to Egypt had actually occurred in 1919.

There was even more outrage due to the fact that the film presented El Senbellawein, Oum Kulthum’s hometown, as completely backwards and misogynistic, offending those who knew the singer personally, including her own family. However, audiences who got a showing of the film have agreed that it is supposed to be meant as an artistic interpretation of Oum Kulthum’s womanhood, instead of being strictly biographical.

Neshat has acknowledged this.

“I think for Oum Kulthum everything [shown in the film] was fact except when she lost her voice; that was totally fiction,” Neshat said. “[As for] the female character, who was the Iranian woman character, it was really based on some of my own experiences, the challenges that I had when I first started to make the film. I thought I was going to make a biopic and then I was really facing criticisms from the Arab world thinking, ‘How dare you as a non-Arab speaking [artist], someone who didn’t grow up with Oum Kulthum, who doesn’t understand her lyrics, make a film about her?’”

She added that she completely changed the direction of the story and made a story inside of a story.

“So it shows my challenges as a non-Arab making a film about her, but also my own challenges as a woman artist who has a child – but not exactly fact because I didn’t abandon my son,” she said. “So there are many aspects of both the period film and the actual production that were both reality and fiction.”

Though this artistic vision has been welcomed among viewers so far, screenings have also been met with major setbacks. Egyptian actress Yasmin Raeis, who plays Ghada, was not granted a visa from the U.S. embassy in Egypt in time for the Arab Film Festival. Also, the company holding screening rights in Egypt, MC Distributors, have openly doubted if the film would even be screened in the country.