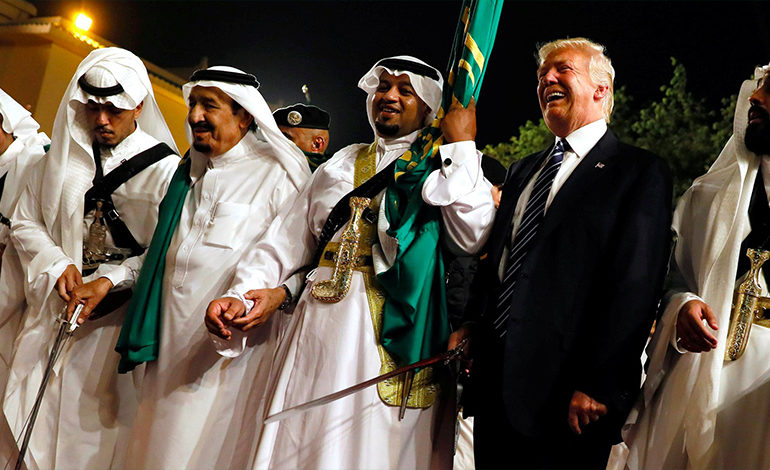 President Trump said on Thursday that he saw no reason to cut off arms sales to Saudi Arabia because of the disappearance of Saudi journalist Jamal Khashoggi, possibly setting up a clash with the U.S. Congress.

Trump also said the U.S. may be closer to finding out what happened to Khashoggi, a prominent critic of Saudi policies who was last seen entering the Saudi consulate in Istanbul on Oct. 2.

Turkish sources have said they believe Khashoggi was killed inside the building and his body removed, allegations that Riyadh dismisses as baseless.

In a sign that Turkey and Saudi Arabia might be looking for a way forward, Turkey accepted a Saudi proposal to form a joint working group to investigate the case, Turkey’s state-run Anadolu news agency quoted presidential spokesman Ibrahim Kalin as saying.

Turkish investigators were prepared to enter the consulate, but were awaiting final authorization from the Saudis, according to Reuters.

Speaking to reporters, Trump said he saw no reason to block Saudi purchases of U.S. arms or its investments in the United States despite the journalist’s case, saying the Gulf nation would just move its money into Russia and China.

“They’re spending $110 billion on military equipment and on things that create jobs … for this country,” he said. “I don’t like the concept of stopping an investment of $110 billion into the United States, because you know what they’re going to do? They’re going to take that money and spend it in Russia or China or someplace else.”

His comments prompted pushback from members of the U.S. Senate, including from some of his fellow Republicans, many of whom signed a letter on Wednesday forcing his administration to investigate Khashoggi’s disappearance and paving the way for possible sanctions on Saudi officials. People hold signs during a protest at the Embassy of Saudi Arabia about the disappearance of Saudi journalist Jamal Khashoggi, Wednesday, Oct. 10, 2018, in Washington. Photo by AP

The chairman of the U.S. Senate Foreign Relations Committee said on Thursday that sanctions would have to be imposed at the “highest levels” of the Saudi government if it were found that the government was behindKhashoggi’s disappearance and reported death.

“If it’s found that they murdered a journalist, that will hugely change our relationship,” Sen. Bob Corker (R-TN.) told reporters.

The Khashoggi incident might make it very hard for the Trump administration to win congressional approval for arms sales to the Saudis. Many lawmakers, including some Republicans, have already questioned U.S. support for Saudi’s involvement in Yemen’s civil war, which has prompted a humanitarian crisis.

Under U.S. law, major foreign sales of military equipment can be blocked by Congress. There is also an informal process in which key lawmakers can put “holds” on arm sales.

Trump, who sealed a $110 billion deal for U.S. companies to sell arms to Saudi Arabia on his first foreign trip as president in May 2017, said Washington was looking into the disappearance of the journalist and working with Turkey and Saudi Arabia.

“We’re looking at it very strongly; we’ll be having a report out soon,” he said. But the president expressed reservations over calls to withhold further U.S. arms sales to Saudi Arabia, warning that such a move “would be hurting us.”

Separately, a State Department spokeswoman said the Saudi ambassador to Washington was heading back to the kingdom and the United States had told him, “We expect information upon his return.”

Global pressure has mounted on Saudi Arabia, a U.S. ally and leading oil exporter, about the disappearance of Khashoggi, who entered the consulate to get documents for his planned marriage. His Turkish fiancée, Hatice Cengiz, who waited outside, said he never re-appeared.

In an Arabic-language tweet on Thursday, Cengiz wrote of her anguish, saying, “It’s as if I’m living between life and death, between sky and land, between heaven and hell … I die every day a thousand times.”

In an interview with the Fox News “Fox & Friends” program, Trump said the United States was working with Turkey and Saudi Arabia, adding, “We have investigators over there.”

However, three U.S. law enforcement sources said that because Khashoggi is not an American citizen and disappeared outside the country, the FBI has no automatic jurisdiction to get involved in the case and could only become involved if requested by a foreign government such as Turkey.

Trump made Saudi Arabia his first foreign stop as president, but in recent weeks has appeared to sour a bit on Riyadh, complaining about the cost of American support for the Saudi military and about oil price increases.

“We are investigating all aspects of the event,” he said in comments quoted by Hurriyet newspaper on Thursday. “It is not possible for us to remain silent regarding such an occurrence, because it is not a common occurrence.”

He also questioned Saudi assertions that the consulate does not have footage of Khashoggi leaving because the mission’s security cameras only provide live footage and do not record images.

“Is it possible for there to be no camera systems at the Saudi Arabia consulate, where the event took place?” he said.