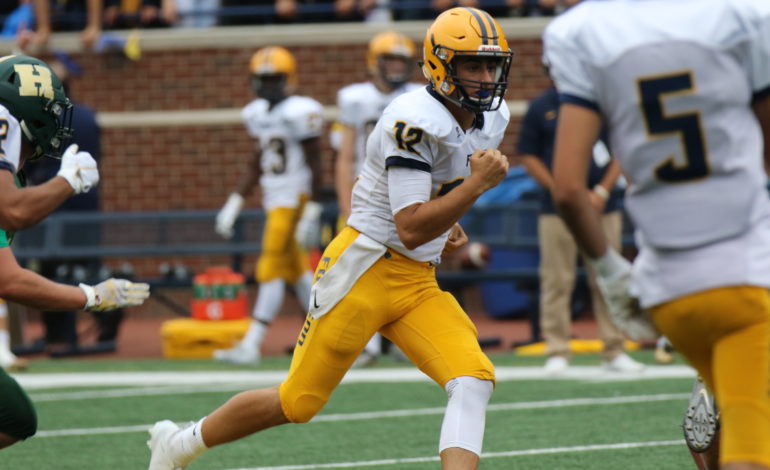 DEARBORN — The Fordson High School Football team has seen much success so far this season.

“I’m proud of the hard work they’ve put in,” said Fordson Football Coach Fouad Zaban. “As far as the season we’ve just got to keep working and try to peak at the right time. That’s going to take more effort.”

According to officials, Fordson has won 75 percent of its games this season and ranks within the top 25 high schools in Michigan.

Zaban chose Hussein Ajami, Mouhamed Mehdi and Abraham Jaafar, all 17-year-old seniors, to speak to The AANews about the team’s recent success.

“We’ve been trying to put in everyone’s mindset to take it week by week, just focus on the team you’re playing,” said Ajami, a quarterback. “I think everyone’s starting to get there.”

“Coach said we just need to get 1 percent better every day and that is what’s going to get us there,” said Jaafar, a Fordson running back.

“We’re just trying to find our balance,” he said.

“With a team like Belleville being that good, as soon as you make one mistake they’ll take advantage of it,” Jaafar said.

The players said they try hard to balance their academics while playing football for Fordson; all three have received scholarship offers from prestigious schools.

“Education is where it peaks at though,” Mehdi said. “Forty years down the line, you got to look to the future. The football is not going to last in the long run, but education is.”

“Their day is full,” Zaban said. “After school they’re working or they have practice, and on top of that and have homework. The majority of this team is high-achieving academically.”

“Some of us work as well, so our days are cram-packed,” Mehdi said. “We wake up early for school, practice football for hours a day.”

“You have to sacrifice a lot,” he said. “I want to say you don’t have a life, but you just have to take your weekends to get ahead. In my case I really feel like football helped me get to a high academic place.”

Mehdi said his family is supportive of his athletic and academic achievements, but hopes they don’t take him too far away.

“When I first told my mom, she just didn’t want me leaving,” he said. “But we talked it out, she knew it was for the betterment of me.

“I feel like football as a sport can shape you into the man you want to become in a sense,” he added. “The team camaraderie, all the future traits you want to have [someday.]”

“My mom is pretty Arab, so she loves me playing football,” Ajami joked. “she loves [academics] more, but thankfully I also have my brother who loves football and loves watching me play.”

Fordson won its game on Oct. 5 against Franklin High School in the last five minutes of the fourth quarter.

“We’ve always been a position to succeed because of them, it’s just up to us to make the play,” he said. “We just go out there and execute what they have for us; that’s why we’re so successful.”

He added that being a leader is a big job.

“You’re trying to get everyone on the same page,” he said. “You want everyone focused on the same goal. We’ve had problems with that in the past, but I feel like we can get there. And then the sky’s the limit.”

“When you have a team of 60 and you have three guys trying to make sure everyone’s on the same page, that is a difficult job,” Zaban said.

Zaban also said that Ajami, Mehdi and Jaafar are leaders not only of the football team, but also of the school as a whole.

“Their biggest attribute is how they demonstrate how to be a teammate, how to work, how to be in the classroom and represent themselves in the school and outside of school,” he said. “To us, that’s the most important thing. Football is a great sport, great to be a part of and to have the opportunity to coach. But the biggest thing for us is to have young men like this and for them to become citizens once they’re graduated and become leaders of the community one day. We feel these guys will be able to become very good representatives of this school, their families and this community.”