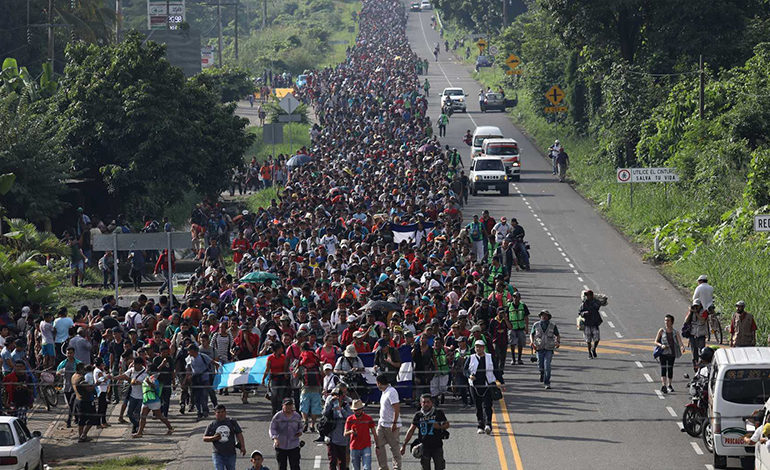 The Pentagon is reportedly preparing to send troops to the southern border to assist the United States Customs and Border Patrol in handling a "migrant caravan" making its way through Mexico to the U.S. border.

WASHINGTON — The Trump administration may send up to 1,000 active-duty troops to the U.S.-Mexico border to stop a caravan of migrants, administration officials said on Thursday, as President Trump hammered away at the issue of illegal immigration ahead of the mid-term elections.

Trump’s threat was sparked by the advance of a caravan of Central American migrants trekking through Mexico, heading toward the United States.

“I am bringing out the military for this national emergency,” Trump wrote on Twitter. “They will be stopped!”

The Department of Homeland Security (DHS) has asked the Pentagon to send forces to the border in a preliminary request that could require deploying between 800 and 1,000 active-duty troops, two U.S. officials said, speaking on condition of anonymity.

The U.S. military is prohibited from carrying out civilian law enforcement on U.S. soil unless specifically authorized by Congress.

Although Trump’s language has suggested the military might be directly involved in preventing the migrants from entering the United States, one official said the troops would engage only in logistics and infrastructure services, like setting up tents, and not law enforcement activities.

There are currently 2,100 National Guard and reserve troops along the border, but the DHS request could lead to the first large-scale deployment of active duty U.S. military forces to support the border protection mission under Trump.

The Pentagon said it was working with DHS to “determine the specifics of our support” to the Customs and Border Protection agency, part of DHS.

Trump and his fellow Republicans have sought to make the caravan and immigration major issues ahead of the Nov. 6 midterm elections, in which the party is trying to maintain control of the House of Representatives and the Senate.

Fleeing violence, poverty and government corruption in their home countries, the caravan of migrants continued on Thursday their slow trek toward the distant U.S. border.

Men, women and children set off at dawn from the town of Mapastepec, in Chiapas state, southern Mexico. A local official said 5,300 migrants had assembled in the town on Wednesday night.

Meanwhile, further south in Guatemala, a second caravan of more than a thousand people that formed on Monday but had since broken up into smaller groups also pushed on northwards.

“To those in the Caravan, turn around,” Trump wrote on Twitter. “We are not letting people into the United States illegally. Go back to your country and if you want, apply for citizenship like millions of others are doing.”

Trump pledged during the 2016 presidential race to build a wall along the southern U.S. border with Mexico. However, funding for his signature campaign promise has been slow to materialize, even though his party controls Congress.

In April, frustrated by lack of progress on the wall, Trump ordered the National Guard to help secure the border.

Adam Isacson, an official at the Washington Office on Latin America, a group that advocates for migrant rights, expressed misgivings about the potential deployment.

“Even if it’s a short-term deployment, it’s another step toward militarization of our border,” Isacson said, adding that 40 percent of people being apprehended at the border were children and families.