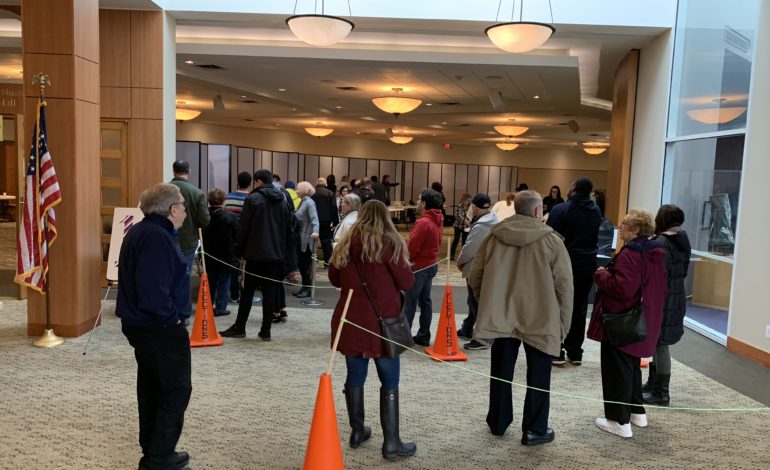 Voters lining up and waiting patiently at a polling precincts in West Bloomfield, Michigan to cast their votes in the midterm elections. A heavy turnout has been reported in many precincts in Southeast Michigan. Photo by The AANews

WASHINGTON – American voters will decide whether Trump’s Republicans maintain their grip on the U.S. Congress, or if Democrats can slow the president’s agenda after a divisive campaign marked by clashes over race, immigration and trade.

The first national elections since Trump captured the White House in a stunning 2016 upset is a referendum on the polarizing president and a test of whether Democrats can turn the energy of the liberal anti-Trump resistance into victories at the ballot box.

The Democrats have a good chance of winning at least the U.S. House of Representatives and slimmer hopes of gaining control of the Senate, opinion polls show.

If they do take the House, Democrats could launch congressional investigations into aspects of Trump’s administration from his tax returns to possible conflicts of interest, challenge his overtures to Saudi Arabia, Russia and North Korea, and oppose him on immigration, tax cuts and trade. Voters casting their votes for the midterm elections in a precincts in West Bloomfield, Michigan. Photos by The AANews

If Republicans hold onto both chambers of Congress, Trump likely would claim vindication for his polarizing style, a month after he secured a conservative majority on the Supreme Court when the Senate approved nominee Brett Kavanaugh after a fight over sexual misconduct accusations that split the nation.

Striking a dark tone at a rally in Indiana on Monday evening, Trump accused Democrats of “openly encouraging millions of illegal aliens to break our laws, violate our borders and overrun our country.”

All 435 seats in the House, 35 Senate seats and 36 governorships are up for grabs in elections focused on dozens of competitive races that opinion polls show could go either way.

Democrats are favored by election forecasters to pick up the minimum of 23 House seats they need for a majority.

The first polling stations close at 6 p.m. Eastern time (2300 GMT) with early results expected shortly after but a full picture likely will not begin to emerge until late at night.

Republicans are expected to retain their slight majority in the Senate, currently at two seats, which would let them retain the power to approve U.S. Supreme Court and other judicial nominations.