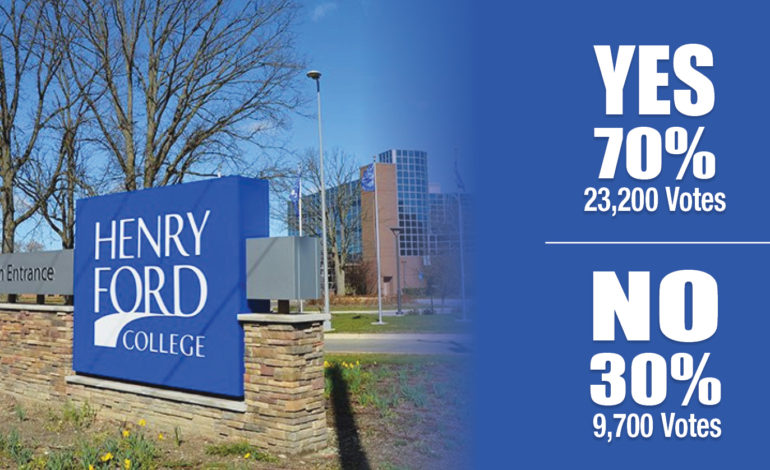 The one-mill tax has been in place since 2013 and will be extended until 2024 now that it has been approved overwhelmingly by voters. 23,200 voters, or 70 percent, gave their approval for the renewal of the millage, while only 9,700, or 30 percent, opposed it.

“I am humbled and honored by the faith you have in this college and by the way you showed that faith in renewing our millage,” Kavalhuna said. “We strive every day to be worthy of your faith and support.

“I am grateful to the members of our Board of Trustees, our cabinet and our staff for getting the word out about our college, our stewardship of public funds and our value to our community,” he added. “This millage would not have passed without their individual and collective efforts.”

Kavalhuna acknowledged the hard work of John McDonald, the president of the HFC American Federation of Teachers, who chaired the millage advocacy campaign.

Since its founding in 1938, Henry Ford College has been touted as one of the best pathways to a higher education in the state and in bringing capital to the city. On November 6, Dearborn residents decided to reinvest in the school.

Residential property taxes overall account for 9 percent of HFC’s funding. That includes a separate 2.5 mill tax that is renewed every 10 years. The larger tax will be up again for a vote in 2024.

According to the Dearborn Assessor’s Office, the average taxable value of homes in Dearborn in 2018 is approximately $54,000, with an average market value of about $108,000.

When the voters approved this mill in 2013, the average taxpayer was billed $3.75 per month. As home values have increased, the monthly cost has increased by an average of 75 cents, bringing it to the current level of $4.50 per month or $54 per year.

About 9,000 full time students are enrolled at HFC, which was originally called Henry Ford Community College, with about 36 percent of its student body living in the city and 42 percent of college-bound Dearborn high school students choosing to attend HFC.

The college employs about 180 full time faculty, but is required to staff 200 teaching faculty by 2021.

Students residing in the Dearborn School District pay only $99 per course credit versus $172 that non-residents pay.