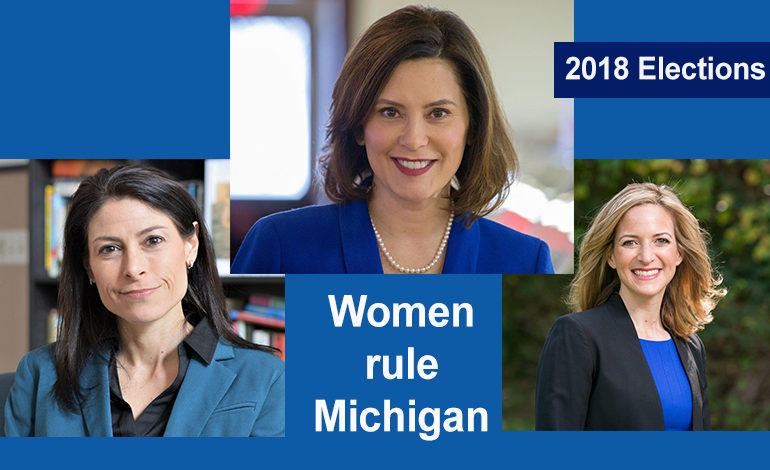 In a pivotal election, Democrat Gretchen Whitmer has won the race for governor of Michigan.

She swept 53.3 percent of the votes, beating Republican Bill Schuette in 17 of Michigan’s 83 counties. Among them were Macomb, Oakland, Genesee, Wayne and Kent counties, which gave her their majority votes— with Oakland County having the largest voter turnout— a whopping 64 percent. The state also saw its highest voter turnout in 50 years; it reached 57.5 percent, with nearly 2.3 million Michiganders voting for Whitmer.

“No matter the ultimate outcome, Michiganders have made it clear that they are ready for change at the state house,” he said. “House Democrats are ready to get the job done alongside our next governor, Gretchen Whitmer.”

Whitmer spoke about her eagerness to take on the position.

“I am humbled and I am excited about getting to work,” she said. “We’ve got 55 days between now and the first of the year and we are hitting the ground running, starting today.”

Whitmer and her family have already planned to move into  the governor’s official residence, which has been unoccupied since 2011.

She plans to make good on her promise of shutting down Line 5 as well. Owned and operated by Canadian company Enbridge, Inc., this 65 year-old gas and oil pipeline moves nearly 23 million gallons of oil through the Great Lakes, just west of the Mackinac Bridge. Whitmer, along with Democratic Attorney General-elect Dana Nessel, vowed to close down the pipeline time and time again during their campaigns.

Following her win, Nessel took to Twitter to express her gratitude.

“At 9 this morning, my opponent, Tom Leonard, called to concede,” she wrote. “Tom, you ran a great race. It has been an honor to run against you these last four months. To all of my supporters, thank you. We made our dream a reality. I’m ready to do the work.”

Nessel also revealed that she has made LGBTQ history.

“And for all of you out there who can’t handle the fact that I’m about to become the first openly gay person to hold statewide office [in Michigan]…” she said before embracing her wife, Alanna Maguire, with a kiss as she addressed a crowd of supporters.

“Dana’s struggles and experiences as an openly lesbian woman has forged in her a commitment to fairness and equal rights— and her tremendous passion and energy for uplifting those values will be invaluable in the attorney general’s office,” said Parker, a former mayor of Houston, Texas. “In electing Dana, Michigan voters forever changed what is possible for an openly LGBTQ candidate in the state and opened the door to more LGBTQ leaders who want to run and make change.” Democrat Jocelyn Benson managed to make history with her win as well. She won 53 percent of the vote in the race for secretary of state, defeating Republican Mary Treder Lang and becoming the first Democrat to hold the position in 24 years.

Benson assured Michiganders that she will do right by them.

“I’m ready and I will not let you down,” she said. “The people of Michigan deserve a secretary of state who works as hard as you do.”

Benson made a campaign stop at The AANews offices in Dearborn on September 28, where she met with local business owners, organization leaders, law enforcement and court officials, among others, to discuss the Arab American community’s concerns and her plans for improving the Secretary of State (SoS) office in Lansing and its branches state wide.

She plans to implement a 30-minute guarantee, where customers can get in and out of a branch office in 30 minutes or less.