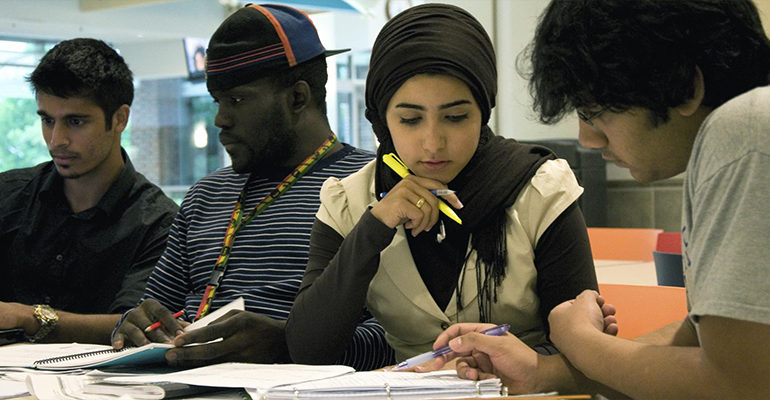 Fewer Arab students are choosing to study at universities in the U.S., while the number of American students going to the Middle East has surged modestly.

WASHINGTON — Fewer Arab students are choosing to study at universities in the U.S. than in the previous year, according to a report published on Tuesday, while the number of American students going to the Middle East has surged modestly.

The Institute of International Education’s 2018 Open Doors report shows that in the last academic year, the total number of undergraduates from the Middle East and North Africa choosing to study in the United States was down 9 percent.

Saudi Arabia, which among Arab countries sends the largest number of undergraduates to American colleges, accounts for much of the overall drop in the number of Arab students studying in the United States. In the academic year 2017-18, the kingdom sent 27,646 undergraduates to American colleges, compared to 32,538 the previous year, a decline of 15 percent. The drop is attributed to the reduction of the King Abdallah Scholarship Program, which funded overseas study for Saudi students.

“When you shrink a scholarship program that funded so many students, you’ll get that kind of decline,” said Allan Goodman, president and chief executive officer of the IIE, in a telephone call with reporters. “When a scholarship program ramps up again, as I expect it will in the Saudi case, you’ll see large increases in coming years.”

The Muslim travel ban executive order issued by President Trump in January 2017 also contributed to the reduction in the number of Arab students studying in the U.S.. Three of the seven countries affected by the order — Syria, Libya and Yemen — showed sharp decreases in numbers of students studying at American colleges.

Laura Stein, visa policy analyst at the Bureau of Consular Affairs at the U.S. Department of State, said in the conference call with reporters that the U.S. government had not completely stopped issuing visas to students from countries affected by the order.

“There are only two countries where we have limited visas, Syria and North Korea,” she said. “As for other countries on the list, we’re still accepting students from those countries.”

“We regret that the flow of students to U.S. universities from countries in the Middle East appears to have been significantly reduced in the past year, most likely by the Muslim ban and other changes in the administration’s visa processing policies,” Judith E. Butler, president of the Middle East Studies Association and professor of history at Georgetown University in Washington D.C., said in a statement on the decline in the numbers of students arriving in the United States from the Middle East and North Africa. “Students from the Middle East now have reduced opportunities to learn about our country and our campuses are less likely to be enriched by their presence.”

On the other hand, there was a sharp increase in the number of American students choosing to study in the Middle East and North Africa, according to the report. Of the 332,727 American students who chose to study abroad in the academic year 2016-17, 6,901 chose to study at institutions in the MENA region, compared to 6,044 the previous year. This is an increase of 14.2 percent on the previous year, the largest increase for any world region, according to the report. Europe remains the most popular destination for American students, attracting more than half the total of Americans studying abroad.

“It’s encouraging to hear that more American students are choosing Middle East countries when studying abroad,” Butler said. “One of our goals at the Middle East Studies Association is to increase public understanding of the region and its peoples and we hope these students will bring their experiences and knowledge back to the U.S. and share them within their communities.”