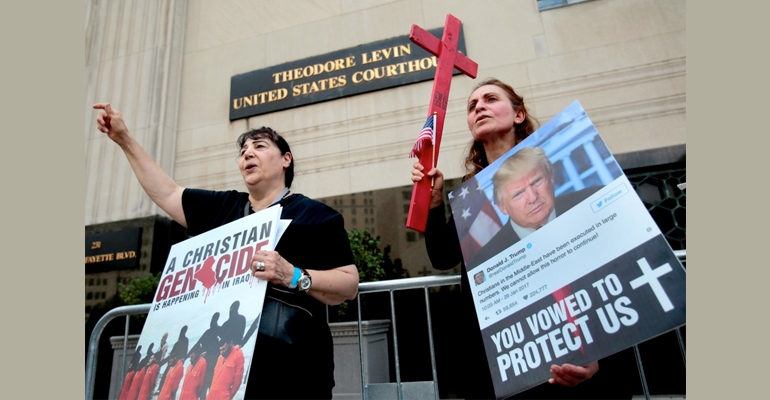 U.S. District Court Judge Mark Goldsmith granted two motions filed by the American Civil Liberties Union of Michigan in 2017: Release of the detainees and sanctioning of U.S. Immigration and Customs Enforcement for “demonstrably false statements to the court designed to delay the proceedings.”

“The law is clear that the federal government cannot indefinitely detain foreign nationals while it seeks to repatriate them when there is no significant likelihood of repatriation in the reasonably foreseeable future,” Goldsmith said in an opinion released Tuesday.

The case, Hamama vs. Adducci, sought to end the detention of some 1,400 Iraqis nationally, including 114 initially from Metro Detroit, who had been rounded up by the federal government for deportation in June 2017.

The raid followed President Trump’s executive order barring admission into the United States of nationals from seven countries, including Iraq. In March, Iraq was dropped from the list when a new policy was negotiated between it and the United States.

The ACLU had argued that if the detainees were repatriated to Iraq, they would face torture or death for their Christian faith and some for having served in the U.S. military.

Goldsmith ordered the detainees released within 30 days, acknowledging that even in release they will likely face hardships.

“… They have been deprived of more than a year of their lives with their families and their communities,” Goldsmith said in his ruling. “Additionally, it is doubtful any of them have their old jobs or businesses waiting for them after this long period of time. Even after their release … (they) will have to start over to regain some measure of economic stability.”

The senior ACLU attorney in the case, Miriam Aukerman, said the timing of the ruling meant detainees could be home for at least one holiday this year.

In October, the ACLU filed a petition for the full release and called for sanctions against ICE for repeated delays in providing documents to the court. The government’s document review “has moved at a glacial pace,” Goldsmith said, citing an “endless cycle of potential removals, but with dubious results.”

The ACLU has accused ICE officers of telling detainees to sign documents saying they want to be sent back to Iraq instead of facing prosecution in the United States. More than 30 unwillingly signed, Aukerman said.

ICE officials said they are reviewing the judge’s order and will determine the appropriate next steps, pending decisions by the U.S. Court of Appeals for the Sixth Circuit on related appeals filed by the government on two previous preliminary injunctions ordered by the court.

The raids weren’t the first to remove Iraqis from the United States. In 2014, 163 people from Iraq were removed, according to the Department of Justice in 2017. There have been 325 Iraqis removed since 2010.