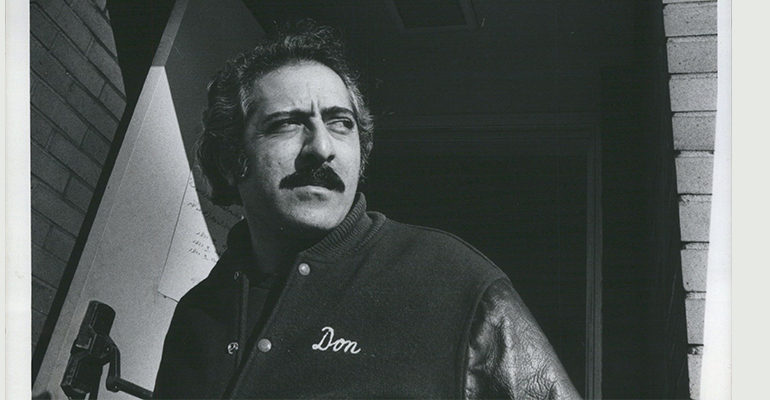 Don Unis, an Arab American activist and leader, dies at 79.

DEARBORN – The passing of anyone, let alone a man as beloved to his family and community as Don Unis, is usually a solemn occasion.

But even as Unis, 79, lay in a hospital bed with tubes in his nose just weeks before succumbing to a heart condition, his trademark passion, positivity and warmth resonated as strong as ever, upbeat in his final message to the community he loved so much.

“I just want to say to everybody, our time has come,” Unis said in a video posted to Facebook by The Arab American News Publisher Osama Siblani, shared recently by the Detroit Free Press.

“Arab Americans make the best citizens. Thank you, and what a dynamic people you are. I am proud to be one of you…I love every one of you.”

Unis, a longtime Lebanese American civil rights activist, Dearborn Fire Department captain, World War II veteran and tireless servant of the Arab American community, would know that as well as anyone, having spent decades in the Metro Detroit area working on behalf of others.

Unfortunately, the community has been left without his wisdom and fighter’s spirit, following his death on Saturday, November 24.

“He was a fighter for the Arab American community and a true servant of the people,” Siblani said.

Unis, known for his skill and love for debate and politics from the local level all the way to the international stage, gained intimate knowledge of the community’s hardships, tribulations and triumphs during his time with ACCESS, allowing him to see the human element behind even the most controversial political issues.

“I would say one of his finest attributes was his sense of diversity, that we are all supposed to be equal,” his nephew Ron Amen, 73, said.

At the Arab American-focused non-profit he was known for tackling complicated humanitarian issues at the ground level, working to help underserved people gain access to social services and Social Security while also helping them fill out applications; and even helping them figure out how to pay their bills in times of financial stress.

His diverse background and life experiences, which also included co-founding the Arab American Political Action Committee (AAPAC) and ACCESS, allowed him to instantly connect with everyone from the most lauded and well known public officials to the common man, from student leaders to underprivileged youth in immigrant communities.

Throughout the course of his long career, it was the little moments that stood out most to Unis, including one at the ACCESS offices in 1989 when he looked over to see a Yemeni American boy who recognized him as “Captain Unis.”

“(The boy) said, ‘My daddy told me all about you,’” Unis was quoted as saying in an archived Free Press article. “‘When I grow up I want to be just like you.’ Honest to God. I got goosebumps. Of all the things we’ve done for the community, that moment was worth all of that.”

Unis gained a well-deserved reputation in the community for an unrelenting work ethic and dedication to Arab American causes (and the causes of oppressed people in the Arab world, especially Palestinians).

“He was the oldest guy in the crowd, who worked the hardest,” said Assistant U.S. Attorney Abed Hammoud, a longtime colleague, community leader and friend of Unis. “So you can’t have an excuse for yourself that ‘I’m tired or it’s time to go home’, because Donnie is still there.

“His passing to me is like a family member in the community is gone; (he was) one of the pillars of the community and not in a figurative way,” Hammoud added.

In the wake of Unis’ death, comments, memories and condolences from the community in appreciation of him and his legacy have flooded social media.

His name is also a mainstay locally, gracing the front of Unis Middle School on Maple Street in Dearborn, the first school in the city named after an Arab American.

But as is the case when breaking most racial and ethnic barriers, the feat didn’t come easily.

The push to name the school after Unis began through the The Arab American News and AAPAC, according to Hammoud, and took months of debate before a resolution was finally reached.

Some school board members wanted to name the K-8 school after Lucille McCollough, a former state representative, but then-board member Aimee Schoelles came up with a plan to honor both.

“The board hesitated back-and-forth at the end, but Aimee had the very bright idea to do a mixed motion with a bunch of schools in one motion,” Hammoud said. “It was a fight to name it after Don.”

According to Hammoud, this was in large part because Unis would “never fall in line” and was “not an establishment guy.”

During those days the political climate was far more contentious, Schoelles, a former president of the Dearborn School Board and longtime AAPAC member, said, adding that some on the Board spoke unfavorably of Unis during those times. Board members wanted to swap Unis’ name for that of the less “controversial” Arab American leader Michael Berry.

But Schoelles suggested naming the elementary school building for McCollough, the middle school for Unis and the local career center for Berry. This not only allowed Unis’ name to find its way onto the school in 2004, but ultimately gave a major boost to the morale of young Arab American students.

“That meant a lot,” Schoelles said. “Don saw it as this is something where these kids are going to be able to walk in and say, ‘Wow, he’s like me and his name is on a building.’”

Unis was honored with his name on the school building not because of any monetary donation, but because of his service to the community.

His legacy of service went far beyond the school system, extending into all forms of community programs, media outlets and more.

Schoelles characterized him as a “truly genuine person” who always had time to teach and help others and always saw a job through to its finish, especially on election days. Unis would remain at the polls for the entire day, rallying and encouraging young Arab American volunteers.

“He’s going to be missed in more ways than we realize,” Schoelles said. “Having a true believer, a true fighter is something that every community needs. I hope that his legacy lives on and that the people that know him and remember him pass those values onto the next generation.”

“He always defended the rights of those who are less fortunate.”

He was buried at St. Hedwig Cemetery. A memorial service will be held by the Arab American Political Action Committee (AAPAC) on Wednesday, December 5 at the House of Condolences, 7350 Chase Road in Dearborn, at 5:30 p.m (open to the public with limited seating).

The family is suggesting memorial donations to the Dearborn Firefighters Burn Drive.