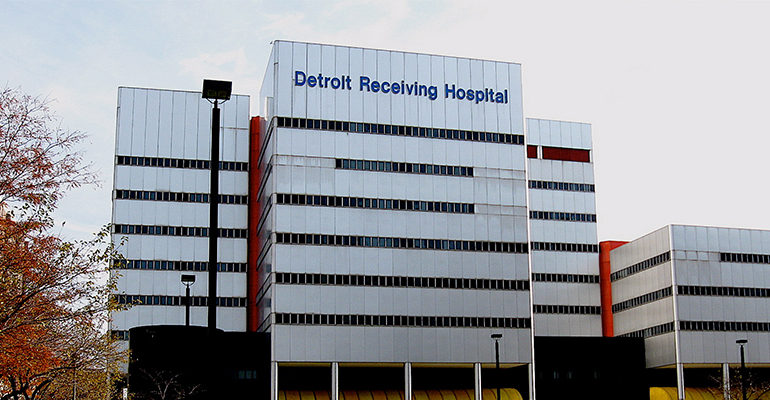 DETROIT — Detroit Receiving Hospital was under inspection again this week after it failed a federal review in October when federal investigators found multiple cases involving contaminated instruments and other infection control violations, according to an inspection report released by the federal government on Wednesday.

This comes just days after the federal Centers for Medicare and Medicaid Services (CMS) released another report that found Harper University Hospital failed Oct. 18 inspections launched after complaints by physicians over poor quality of care at hospitals on the health system’s Midtown campus.

In October, inspectors reviewed six cases of contaminated instrument events that occurred between Sept. 15 and Oct. 15 and concluded Detroit Receiving “failed to ensure that breaches in sterile processing of surgical instruments were documented, investigated and corrective measures implemented in coordination with the Infection Control Department…” for two patients reviewed. The federal agency has informed both Detroit Medical Center hospitals that they are now subject to unannounced inspections by the Michigan Department of Licensing and Regulatory Affairs (LARA). The DMC confirmed the state inspection at Detroit Receiving was already underway Wednesday morning, according to the Detroit News.

The Centers for Medicare and Medicaid Services (CMS) has informed the DMC that federal funding for Harper and Detroit Receiving hospitals will be terminated if the problems aren’t fixed.

It’s the second time in more than two years that the DMC has been threatened with loss of Medicare and Medicaid dollars over problems with dirty surgical instruments.

A six-month Detroit News investigation published in August 2016 found the DMC had an 11-year history of problems with dirty surgical instruments at its five Midtown hospitals, endangering patients and causing surgeries to be canceled or delayed. The coverage spurred federal and state investigations that forced the health system to reconfigure its sterile processes.

“Detroit Receiving Hospital and Harper University Hospital expected and welcomes the arrival of the surveyors following receipt of a letter from the Centers for Medicare and Medicaid Services (CMS) earlier this month notifying the hospitals that LARA would conduct a survey to evaluate compliance with health and safety requirements,” DMC said in a statement on Wednesday.