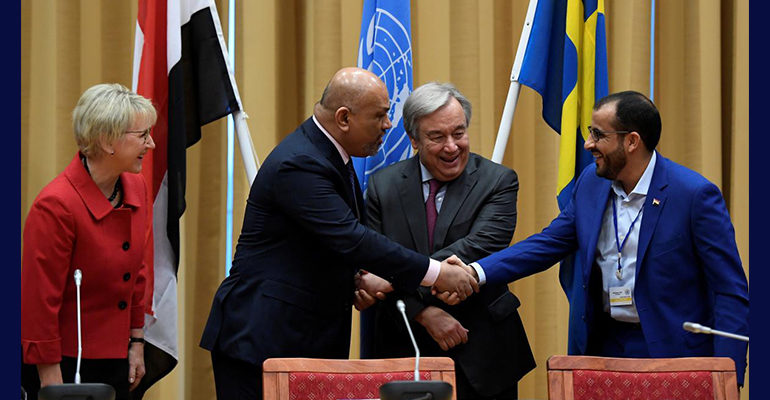 RIMBO, Sweden — Yemen’s warring parties agreed on Thursday to cease fighting for the Houthi-held port city of Hodeidah and withdraw their troops, the first significant breakthrough for U.N.-led peace efforts in five years of conflict.

At the close of a week of talks in Sweden, U.N. Secretary-General Antonio Guterres said a framework for political negotiations would be discussed at the next round of talks at the end of January between the Iranian-backed Houthis and the Saudi-backed government of the exiled President Abd-Rabbu Mansour Hadi.

Western nations, some of which supply arms and intelligence to the Saudi-led coalition that intervened in Yemen in 2015, had pressed the two sides to agree to confidence-building steps to pave the way for a wider truce and a political process to end the war, which has killed tens of thousands of people.

The conflict has pushed Yemen, the poorest country on the Arabian Peninsula, to the verge of famine. The World Food Program said the Hodeidah deal was a much-needed boost for its task of feeding 12 million severely hungry Yemenis.

The Houthis control most towns and cities, including the capital Sanaa, from where they ousted Hadi’s government in 2014. It is now based in the southern port of Aden.

“You have reached an agreement on Hodeidah port and city, which will see a mutual re-deployment of forces from the port and the city, and the establishment of a governorate-wide ceasefire,” Guterres said.

“The U.N. will play a leading role in the port,” he told a news conference in Rimbo, outside Stockholm.

The U.S., which provides military support to the Saudi-led campaign in Yemen, welcomed the agreement.

Secretary of State Mike Pompeo said that while many details still needed to be worked out, the talks marked a pivotal first step.

“Moving forward, all must continue to engage, de-escalate tensions and cease ongoing hostilities,” he said in a statement.

In a largely symbolic rebuke to President Trump, the Senate passed a resolution on Thursday to end military backing for the war in Yemen. The measure is unlikely to become law.

U.N. envoy Martin Griffiths said both parties would withdraw “within days” from the port, a main entry point for most of Yemen’s commercial imports and aid supplies, and later from the city of Hodeidah, where coalition troops have massed on the outskirts.

Houthi forces would also pull back from the port of Salif, used for grains, and Ras Isa, used for oil. Revenues from the three ports would go to the central bank branch in Hodeidah.

A Redeployment Coordination Committee including both sides will oversee the ceasefire and withdrawal, according to the agreement. It will be chaired by the United Nations and report weekly to the U.N. Security Council.

International monitors will be deployed in Hodeidah city and the three ports and all armed forces are due to pull back completely within 21 days of the ceasefire coming into force.

Guterres said the U.N. would push on with tackling issues hanging over from the talks, including reopening Sanaa airport and shoring up the central bank.