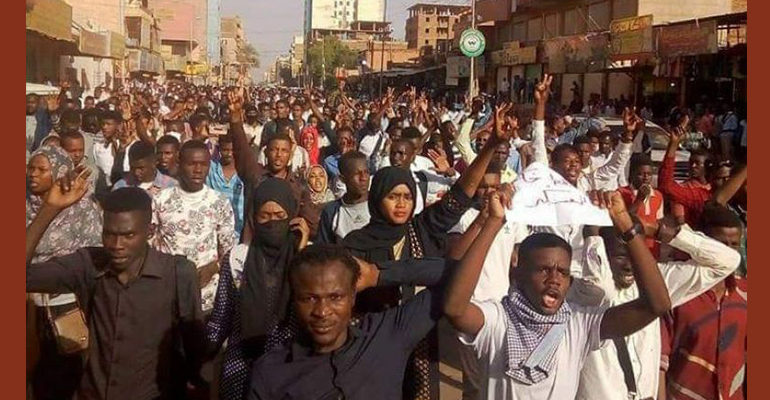 KHARTOUM — At least eight people were killed in protests across Sudan on Thursday as thousands took to the streets against soaring prices, with some calling for the overthrow of President Omar al-Bashir, officials and witnesses told Reuters.

Six died in the eastern city of al-Qadarif and two more in northern Nile River state, officials from those areas told Sudania 24 TV, without giving details on how they were killed. There was no immediate comment from the central government.

Police fired teargas to break up a crowd of around 500 people in the capital Khartoum, then chased them through back streets and made arrests, a witness said.

Some of the demonstrators chanted, “The people want the fall of the regime” — a slogan used in the so called “Arab Spring” protests that unseated rulers across the Arab world in 2011. Police said “limited” protests in Khartoum had been contained.

Public anger has been building over price rises and other economic hardships — including a doubling in the cost of bread this year and limits on bank withdrawals. A bonfire is lit along the street during protests against price increases in Atbara, Nile River state in northeastern Sudan December 20, 2018. – REUTERS

In the northern city of Dongola, protesters set fire to the local offices of Bashir’s ruling National Congress Party, witnesses said. To the northeast in Atbara, they hid their faces behind scarves as they came out for a second day, chanting “freedom” and setting car tires alight, video footage showed.

The demonstrations were among the biggest since crowds came out against cuts to state subsidies in 2013, when many also called for a new government — a rare act in a state dominated by the army and security services.

Authorities declared a state of emergency in al-Qadarif, which is near the border with Ethiopia, and extended one in Atbara to the cities of al-Damir and Berber.

Sudan’s economy has struggled to recover from the loss of three quarters of its oil output — its main source of foreign currency — since South Sudan seceded in 2011, keeping most of the oilfields.

The United States lifted 20-year-old trade sanctions on Sudan in October 2017. But many investors have continued to shun a country still listed by Washington as a state sponsor of terrorism, whose president is wanted by the International Criminal Court over charges of masterminding genocide in Darfur — charges he dismisses.

Bashir, one of Africa’s longest-serving leaders, took power in an Islamist and military-backed coup in 1989. Lawmakers proposed a constitutional amendment this month to extend term limits that would have required him to step down in 2020.

In recent months he has dissolved the government, named a new central bank governor and brought in a package of reforms, but the moves have done little to contain an economic crisis.

At 69 percent, Sudan’s inflation rate is among the world’s highest. Severe shortages have forced people to queue at bakeries and fuel stations.