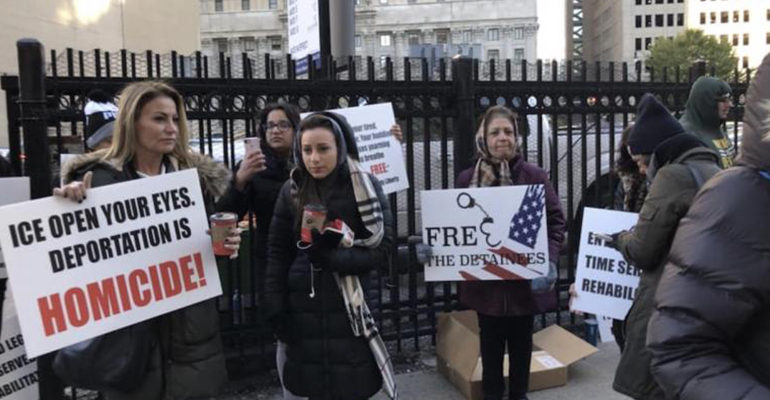 Relatives of Iraqi detainees hold signs against their deportations during a protest in front of the U.S. District Court in Detroit

NEW YORK — On Thursday, a federal appeals court backed the Trump administration in its attempt to deport about 100 Iraqi immigrants who’d been convicted of crimes years ago.

A divided Sixth U.S. Circuit Court of Appeals panel reversed a lower court ruling that had blocked President Trump’s bid to send the immigrants back to Iraq. The appeals court also disagreed with a Michigan federal judge’s order that the immigrants receive bail hearings.

In 2017, the Trump administration detained the Iraqis as part of a broad effort to ramp up immigration enforcement across the country. Many of the Iraqis had been ordered deported years or decades ago because of criminal offenses but had not been deported because their home country would not take them back.

“Though many of these Iraqi nationals had come to expect that the execution of their removals would never materialize, they had been living in the United States on borrowed time,” the appeals court ruling said.

The Iraqis challenged their detentions and deportation orders in court. In November, Federal Judge Mark Goldsmith in Michigan ordered the administration to release anyone held longer than six months while the U.S. government sought to carry out the deportation orders.

The U.S. government said it had an agreement with Iraq to take the deportees back. But Goldsmith criticized the Trump administration in his ruling for making “demonstrably false” statements about the Iraqi government’s cooperation.

Steven Stafford, a spokesman for the Justice Department, said in a statement that the injunctions had “undercut the Executive Branch’s authority and duty to detain and remove aliens — aliens who had been ordered removed from the United States long ago.”

Appellate Judge Helene White wrote a dissenting opinion saying the lower court does have jurisdiction over the claims.

She wrote that the petitioners presented evidence that they were likely to be killed or tortured if deported.

“The government did not contest this evidence,” she wrote.