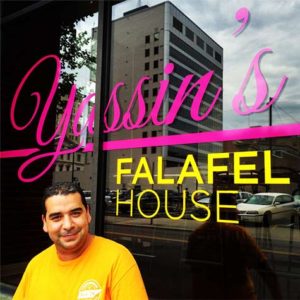 Good Morning America host Robin Roberts made the announcement on Thursday to owner Yassin Terou, who traveled to New York in hopes of winning.

Nearly 500 people submitted nominations for the award, which was created by Reader’s Digest, ABC’s Good Morning America and 10Best.com.

“I feel very grateful to be on this team and I feel like he deserves it,” said employee James McClure.

“The open communication allows us to, no matter where our backgrounds are from, to talk about where we’re going with the restaurant,” added employee Austin Spidell.

The restaurant is the purest example of an immigrant success story, as Terou and his family left war-torn Syria in 2011 before selling sandwiches outside a local mosque.

Terou opened his first restaurant in 2014 and a second one in West Knoxville in 2017.

“I just want to tell the American people, you are a great people,” Terou said on Good Morning America. “Everybody loves you and we know you love everybody. We are going to keep this country great and we’re going to build it together.”

Terou had a hard time at first because of his difficulty speaking English, but said he learned to “handle hate with love” because of the experience.

“When you love and give your love to people, you are stronger than one who gives hate,” he said.

The restaurants are well known for their prominent signs reading “Welcome all sizes, all colors, all ages, all sexes, all cultures, all religions, all types, all beliefs, all people, safe here at Yassin’s Falafel House.”

In addition to falafel, the menu includes fresh-made hummus and the restaurant was featured in a short film produced by the transaction technology service Square that was a finalist at the Tribeca Film Festival, which can be viewed at https://squareup.com/dreams/yassin.

For video of the family and their restaurant visit Good Morning America’s website here.