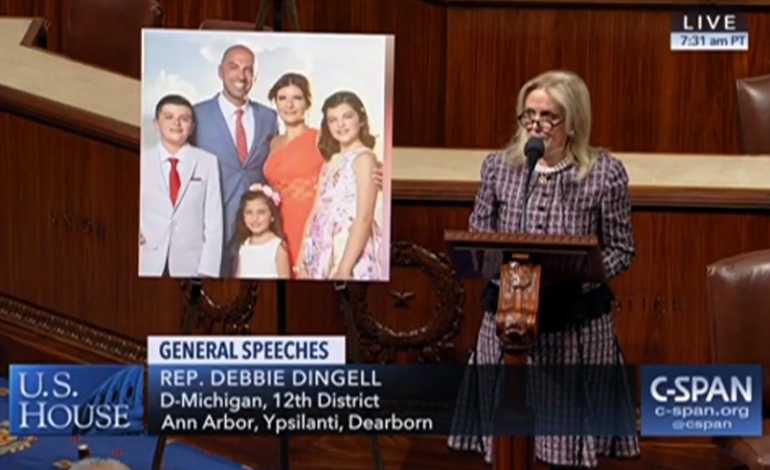 Debbie Dingell speaks about the Abbas family on the House floor

WASHINGTON, DC – With people throughout Metro Detroit still reeling from recent news of the horrific car accident that took the lives of the Abbas family of Northville, Congresswoman Debbie Dingell took to the House floor today to memorialize them, and to introduce new legislation to stop drunk driving.

“In every sense of the word, they were our community,” Dingell said on the House Floor.

“The parents were born and raised in Dearborn. Rima served many as a respected doctor at Beaumont, and had just been promoted to head all the doctors at the hospital. And Issam had a successful career as a lawyer and real estate agent. Children, Ali aged 13, Isabelle aged 12, and Giselle aged 7 were gifts from God and the center of their parents lives but so many others in Dearborn. Their family, their very extended family, was devoted to everything that they did. Their absence stunned this community and is felt deeply and emotionally.”

Dingell added that while nothing can bring back the Abbas family, their lives “were too important to forget.”

She hopes to prevent more senseless loss of life by introducing a bill that would equip all new vehicles with interlock breathalyzer devices.

“I have to go home to a community is still grieving. I can’t look them in the eye unless we are really willing to try to do something,” Dingell continued. “This week, I’m introducing legislation in memory of the Abbas family that would mandate all new vehicles be equipped with interlock breathalyzer devices. This will stop intoxicated drivers from ever starting a vehicle and keep them off the roads. If we can keep one person from dying on the roads and make people think twice before getting behind the wheel when they shouldn’t – even when they are buzzed and think they’ll be ok – then won’t we have been successful?”

Video Dingell’s full 4:54 speech can be seen below.