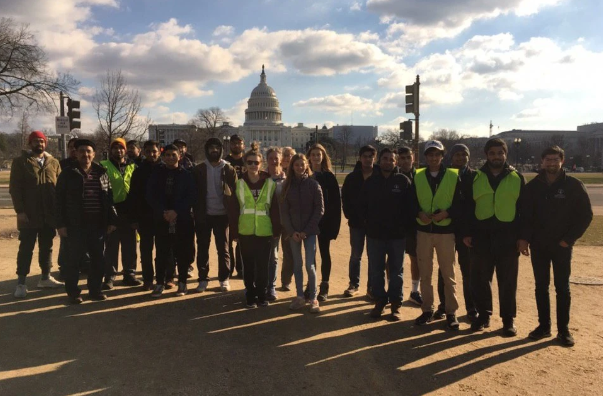 Saturday volunteers from the Ahmadiyya Muslim Youth Association picked up trash outside Independence Hall, the birthplace of the Declaration of Independence and the Constitution, and other national parks closed by the partial government shutdown.

They cleaned up litter, swept the grounds and emptied garbage cans at the Everglades National Park in Florida, Joshua Tree, California and the Cuyahoga Valley in Ohio.

On Sunday, the group visited the National Mall in Washington to continue their work.

“Service to our nation and cleanliness are important parts of Islam,” Dr. Madeel Abdullah, president of the youth group, said in a press release. “We could not sit idly by as our national parks collected trash. We will lead by example and dispose of this garbage appropriately and invite all Americans to join us in these parks and others across the nation.”

The Ahmadiyya Muslim Youth Association is the largest of its kind in the U.S., with more than 5,000 members, boys and men ages 7 to 40.

“We are taking this extraordinary step to ensure that parks are protected and that visitors can continue to access parks with limited basic services,” the statement said.

People from the public joined AMYA to work on the grounds after contacting the group through social media.

According to spokesperson Salaam Bhatti, more than 60 percent of Americans don’t personally know a Muslim person and community projects help to increase dialogue with other religious groups.

National Parks have been without maintenance since the government shutdown began December 22. In a press release on Sunday, the National Park Service said it, “explored a number of options to address the maintenance and sanitation issues that have arisen at a number of highly visited parks” and now plans to use fee revenues to clean up trash and restrooms.