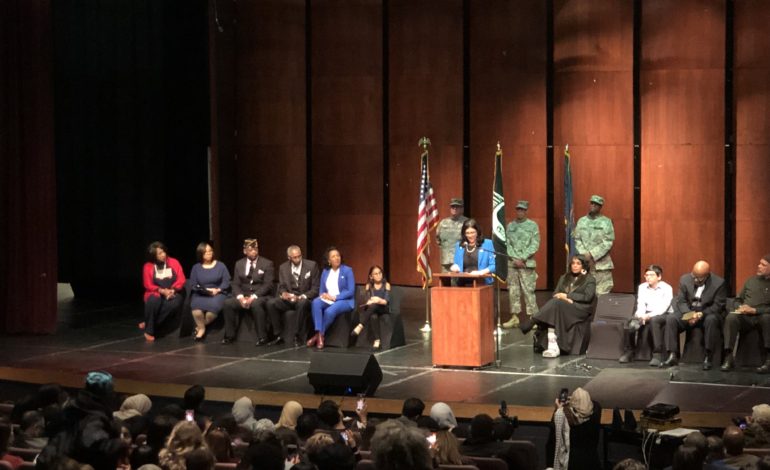 Supporters performed music and poetry leading up to the swearing in ceremony administered by Wayne County Clerk Cathy Garret.

Multiple people speaking at the event made reference to Tlaib’s recent statement, which made headlines across the nation for its included profanity, about impeaching President Trump.

“That moral center and the true essence of who she is will never change,” Garret said. “I am thankful. Irregardless for what you did say I am absolutely proud of you, my sister.”

“I had the privilege of working for Coleman Young,” he said, “who as many of you know, made cursing into an art form.”

“He said, ‘You know those are not the words I use, but sometimes those words need to be said,’” Simmons said.

“It’s no surprise she made headlines worldwide and broke the Internet within hours of being an official representative,” she said. “My auntie Rashida will be known, like others before her, who fought against civil injustice and corporate greed.

“President Trump may not be her biggest fan, but that’s okay because I am,” she added. “Her confidence give people all around the world hope for a peaceful future. If there’s one thing we Palestinian girls are known for, it’s our pride and passion to stand up for what’s right and the Detroit hustle that keeps us chasing our dreams.”

Tlaib said she hopes to keep her connection to her community strong.

“Our nation is rising up, I feel it.” Tlaib said. “Staying rooted in community and connected with the challenges we are facing at home will keep me grounded. I will carry you with me always and ask you to carry me when I need you to. They will come after me and what I represent and so many already has. My mere existence as an outspoken woman of color that can’t be bought scares them.”

Around 500 people attended the event, which also drew about 15 protesters standing across the street from the school, with signs and “Make America Great Again” hats.

Tlaib spoke to the media after the ceremony about the protesters.

“These are not my residents,” she said. “Of course he’s got people that are here and they come from afar. You know my mere existence scares them.”

Tlaib is the first Palestinian American woman to serve in congress and one of the two first Muslim women to serve, along with Rep. Ilhan Omar (D-MN).