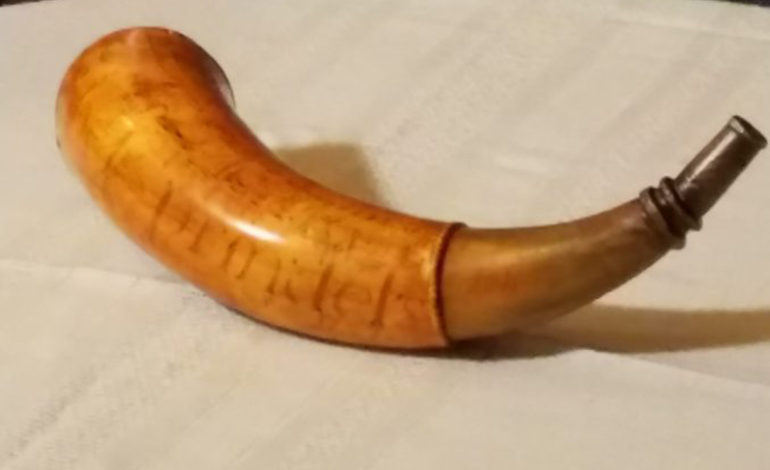 The powder horn recovered by FBI agents and Dearborn Police.

DEARBORN — Media, residents, and history buffs alike gathered at the Dearborn Historical Museum’s Commander’s Quarters on Tuesday, as FBI and other officials showed off a newly recovered item with significant historical ties to the city.

The item, an oxen powder horn made in 1757 and stolen from the Dearborn Historical Museum in 1952, was officially returned to its rightful owners, the Detroit Historical Society, after decades of tracking and investigation by the Dearborn Police Department and FBI agents. The powder horn recovered by FBI agents and Dearborn Police.

In 1991, the horn appeared for auction at Christie’s Auction House, and was sold to an unknown buyer for $13,000. In 2017, the Dearborn Police Department requested the assistance of the FBI.

Finally late last year, the FBI’s Detroit Division and Art Crime Team’s Philadelphia Division were able to recover the horn just in the nick of time, as it was about to be auctioned off to a buyer in Philadelphia who did not know it was stolen. A close-up of the horn.

Made at Fort #4 in Charlestown, New Hampshire on June 30, 1757, the horn was the prized possession of soldier and Lieutenant Abel Prindel. It is engraved with his name, rank and the date on which it was made, and has the following verse carved into it:

I powder with my broth ball

And not at home to feel their hateful spite

Where all our friends of every sex and age

Will be exposed until their cruel rage The horn was one of the most significant artifacts in the museum’s “Saga of a Settler” exhibit because it had belonged to John Nowlin, one of the earliest settlers of “Dearbornville” (now Dearborn).

In 1833, the Nowlin family left their homestead in New York and traveled to Detroit by steam boat. After landing in Detroit, the family traveled by wagon to Dearbornville.

It’s not clear how the horn came into Nowlin’s possession, but it has been handed down through several generations of the family and remained in their care and possession until June 1947, when it was sold to the Detroit Historical Museum.

The horn will be on display until Spring 2019 at the Detroit Historical Museum, and following that will be used in “Frontiers to Factories,” a permanent exhibit.