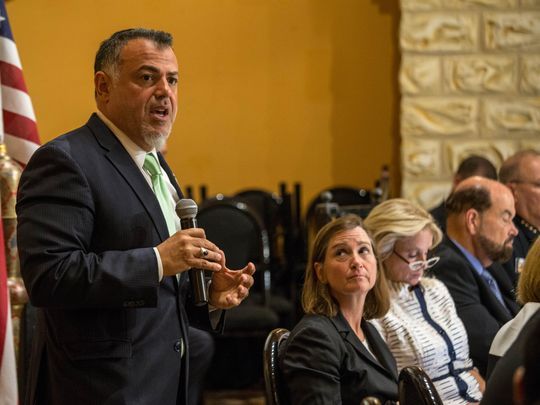 ROMULUS — Arab American attorney Nabih Ayad was elected as the new chairman of the Wayne County Airport Authority Board today, a little over four years after he was first appointed to the board by former Wayne County Executive Robert Ficano in November 2014.

Ayad, who has previously served as the board’s secretary, is a private practice attorney from Dearborn with an office in downtown Detroit, as well as the chairman of the board for the Arab American Civil Rights League (ACRL).

Ayad said he has big plans for continuing Detroit Metro Airport’s focus on diversity, which has included an initiative to seek out more minority police officers.

“We’re going to continue to encourage (diversity) on all levels of the airport,” Ayad told The Arab American News. “Not just on hiring and administration, but on the contract and business side, encourage them to get involved.”

Ayad, 48, is the first Arab American and American Muslim to be elected to the position.

Aside from working with airport CEO Chad Newton and the board to oversee day-to-day operations of the airport, his plans include building bridges with ethnic communities, “regardless if they’re Arab, Chaldean, African American, Hispanic or Asian,” he said.

Ayad also thanked the board for electing him chairman and showing confidence in him.

Ayad is a graduate of the Detroit College of Law at Michigan State University and holds a bachelor of science degree in accounting from the Wayne State School of Business in Detroit. His term on the Airport Authority Board expires October 1, 2020.

He has also served as a Michigan civil rights commissioner from December 2008 to 2011 and has been a member of the Advisory Counsel on Arab and Chaldean Affairs for the state of Michigan since 2007, among several other organizations he has been involved with over the years.

The Airport Authority is an independent agency responsible for the operation of Detroit Metropolitan Airport, Willow Run Airport and Crosswinds Marsh.

The airports are home to more than 18,000 jobs according to Detroit Metro Airport’s website.

The economic impact of DTW is $10.2 billion across the state of Michigan according to a January 2014 report from the University of Michigan-Dearborn.