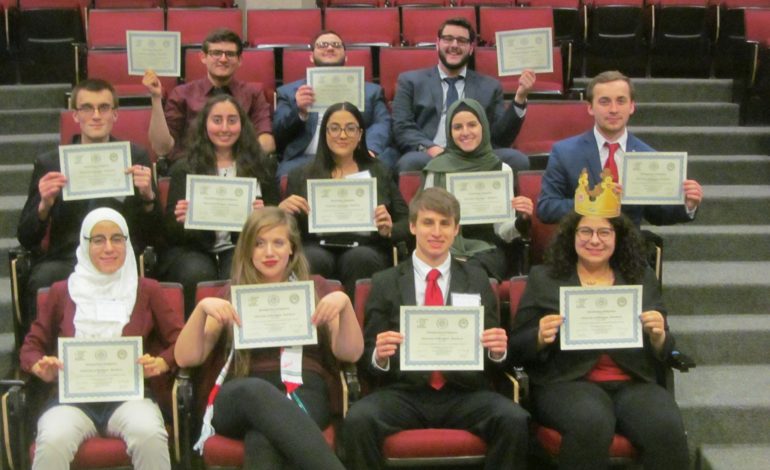 Students from the U of M-Dearborn Model Arab League. ALLENDALE, MI — The University of Michigan-Dearborn took home delegation awards for the 18th consecutive year as part of negotiations in the Model Arab League at Grand Valley State University this past weekend.

The U of M-Dearborn group attended the event at GVSU for two and a half days of negotiations, representing the nations of Jordan and Palestine in a contest that featured 16 different country delegations from campuses across the state.

The U of M-Dearborn students also won awards for top delegation, “against stiff competition,” Stockton said.

The MAL is a simulated conference where students represent one of the 22 member states of the Arab League and debate regional and global issues that affect those states.

While the real life Arab League has been hit by criticisms that it’s ineffective and toothless, especially in regards to the omnipresent issue of security and the pursuit of freedom among Palestinians, the Model Arab League at U of M-Dearborn gives students the chance to exercise their problem-solving, negotiating and debate skills.

“The delegates worked very hard to prepare for this, and deserve their laurels,” Stockton said, thanking the dean and the Social Sciences staff at the university for their support.