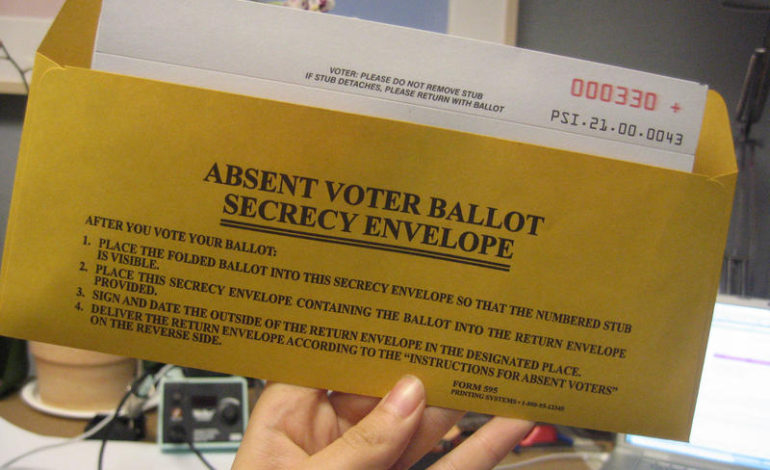 FLINT TOWNSHIP, MI — Michigan voters will be allowed to vote from home without a reason for the first time starting in May, Secretary of State Jocelyn Benson announced.

Joined by Flint Township Clerk Kathy Funk, Benson announced the change at a joint press conference this past week that citizens can now request absentee ballots without needing a specific reason.

Previously, prospective absentee ballot voters had to provide a reason for needing a ballot such as being 60 years of age or older, or expecting to be out of town on Election Day.

“In the first election since November…voters will have the opportunity to vote from home (without providing a reason),” Benson said at the conference.

The change helps bring Michigan up to date with similar states across the country that also offer the option of voting from home, she added.

“Our team has been working since day one to implement this important reform that voters supported overwhelmingly last fall,” Benson said in a press release. “I am proud that we made it happen in time for this May’s local elections.”

It is expected that the change will help bring up voter turnout numbers in areas where it is traditionally low.

Michael Gordon, a business owner in Flint, said the change will help him to avoid a loss in profits on Election Day.

“I’­­m a local business owner (in Flint Township),” he told MLive.com. “I work open to close; I’m the only employee in my shop. Waiting in line means lost revenue… I was ecstatic that I could vote from work.”

Benson said a study was commissioned looking at the lowest voter turnout areas in the state in preparation for making the change. She added that she and her team will be traveling to those areas in order to encourage a higher voter turnout for May’s elections.

“The era of non-reason mail-in voting has begun in Michigan and I’m excited about the potential it has to engage more of our fellow citizens in our democracy,” Benson said in the release.