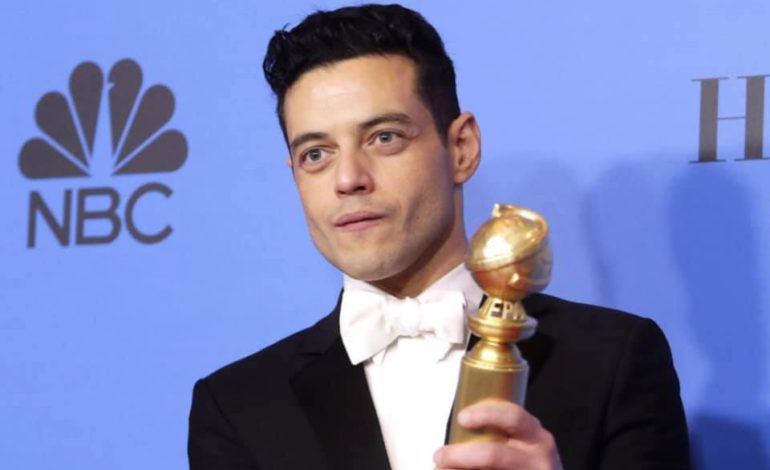 Rami Malek at the 2019 Oscars
The Arab American News
By Farah Harb
Rami Malek, a first generation American and son of Egyptian immigrants to the United States, has won an Academy Award for his lead role in Bohemian Rhapsody, a film about the life of Queen’s lead singer Freddie Mercury.
On his way to the Oscar podium, Malek picked up similar wins at the Golden Globes, the BAFTAs and the SAG Awards. This is Malek’s first Oscar.
“I may not have been the obvious choice, but I guess it worked out,” Malek joked. He thanked Queen for letting him be “the tiniest part of your phenomenal legacy. I am forever in your debt.”

Malek also directed a few words for his younger self.

“I think about what it would have been like to tell little bubba Rami that one day this might happen to him, and I think his curly-haired mind would have been blown. That kid was struggling with his identity,” he said, adding that for anyone struggling with that, “we made a film about a gay man and an immigrant who was unapologetically himself.”

Malek added, “[It’s] proof we’re longing for stories like this. Part of my story is being written right now, and I could not be more grateful.”

Malek continued his sentiment backstage where he said, “My sister was born in Egypt. I think when I grew up as a kid, part of me felt like I had to shed some of that. I didn’t feel like I fit in. I definitely felt like the outsider. As I grew up, I realized how beautiful my heritage is … now, I am so privileged to represent it.”

Malek was the only Arab American awarded, but was not the only Arab artist nominated at Sunday night’s Academy Awards. Lebanese director Nadine Labaki’s feature film, Capernaum, was nominated in the Best Foreign Film category.
Although Capernaum lost out to Roma, the nomination of Labaki’s film, and her being the only female director who was nominated, was an achievement itself.
Labaki was only the second female Arab director to have ever been nominated for an Oscar. Capernaum sheds light on the plight of Syrian refugees, with much of the cast made up of actors who are refugees themselves.
The only other Arab director who was nominated for an Oscar was Ziad Doueiri for his movie “The Insult.”