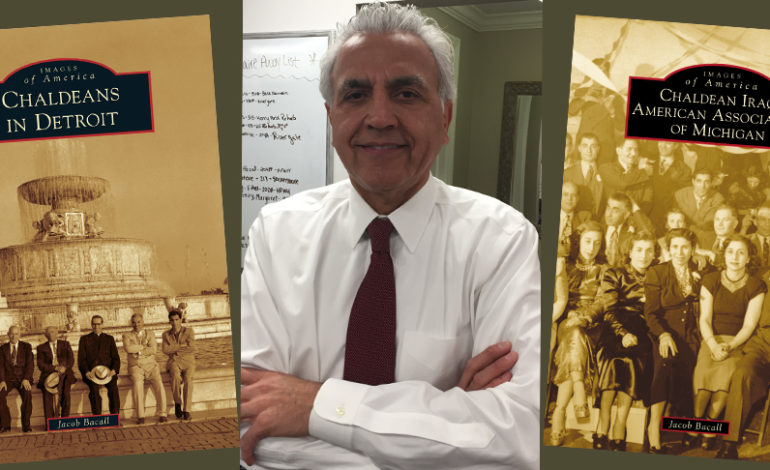 The Arab American experience has been a challenging and at times lonely one, and in many ways it has been mirrored by the experience of Chaldean Americans, who first came to the United States in the early 1900s seeking opportunities and a better life.

Like immigrant Arab Americans in the area, including the Syrian and Lebanese communities that were also drawn to the region, Chaldean Americans were largely enticed by the promise of $5 a day from Dearborn’s Henry Ford, the automotive pioneer who revolutionized the country’s workforce.

The story of Chaldeans’ immigration from their native to Iraq and their subsequent history in Metro Detroit is the subject of a pair of recently published books from author Jacob Bacall, who immigrated to Michigan to begin his own Chaldean American story as a successful businessman in 1977. Jacob Bacall with his sons, Joseph and Michael

The books, “Chaldeans in Detroit” (2014) and “Chaldean Iraqi Association of Michigan” (2018), are both published under the Images of America book series from Arcadia Publishing of South Carolina, which creates glossy soft-cover coffee table books spotlighting local history, arts and culture.

Bacall was given the task of chronicling the history of the association in the second book because of his long history with the group, while his first book was created with the next generation in mind.

“The first book (“Chaldeans in Detroit”) was more for myself,” Bacall said. “It’s like a first-hand experience… I wanted it for the future generation, to go ahead and preserve the history of early Chaldean pioneers.” The books are easy-to-read yet detailed historical accounts of the Chaldean experience in Detroit, where immigrants from Iraq laid down roots and quickly became highly skilled and successful business owners in everything from the restaurant business to party stores and supermarkets.

“The Iraqi people who came to the United States back then had more than one certificate; (they) were known to be from Mesopotamia,” Bacall said. “They got a visa from the American consulate that says Mesopotamia, it doesn’t say Iraq.

“The early pioneers who were Chaldean, they were coming here before Iraq was established as a country.”

Despite facing discrimination because of their different-sounding names, religion and culture, as well as their traditional Aramaic language (said to be the language of Jesus Christ), Chaldeans began to thrive in large part because of their business acumen and strong family ties.

The mentality helped the community to build its foundation, while second and third generation Chaldeans have become better educated and are more likely to become doctors, engineers, computer specialists and to work in other similar professions.

Bacall’s book on the Chaldean Iraqi Association of Michigan uses archival photographs to tell the story of how the association, now 900 families strong, helped to solidify that foundation by serving as a social, community and cultural hub for Chaldeans in the area.

“Founded in 1943, the Chaldean Iraqi American Association of Michigan (CIAAM), hailed by Jacob Bacall as the “mother of all organizations, is celebrating its 75th anniversary,” the foreword of the book reads. “Every picture in this book tells a story, and every story includes a historical image that gives a true sense of life at that moment in time.”

Bacall served in every position on the CIAAM board over the past 30 years.

“There is no one better to write about CIAAM and its accomplishments,” writes Chaldean American Chamber of Commerce President Martin Manna in the foreword. “Jacob perfectly encapsulates what we know to be a successful Chaldean American, drawing from his own experiences and personal insights.”

Both “Chaldeans in Detroit” and “Chaldean Iraqi Association of Michigan” can be purchased on the Arcadia Publishing website or on Amazon.com.

A similar book, “Arab Americans in Metro Detroit” by Anan Ameri, can also be found on Arcadia’s website.

Bacall’s books can also be found in local stores in West Bloomfield, Sterling Heights, Farmington Hills and other communities, as well as several Barnes & Nobles locations in the Metro Detroit area. They’re also available at Chaldean cultural centers, including the Shenandoah Country Club.