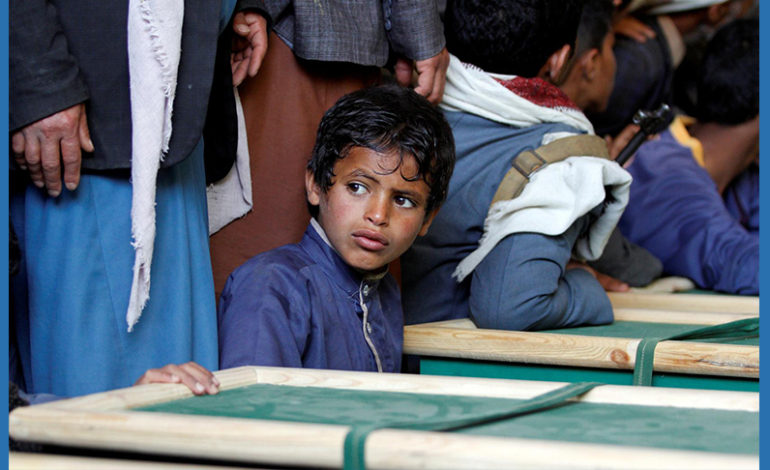 A Yemeni boy during a funeral of people killed by an air strike last week in the northwestern province of Hajja, in Sanaa, Yemen, March 14, 2019. REUTERS

WASHINGTON, D.C. – The Senate voted 54-46 on Wednesday to end America’s involvement in the Saudi-led war in Yemen, potentially setting the stage for President Trump to use veto powers for the first time.

The resolution to end American aid in a war that has been largely invisible to most U.S. taxpayers places the president in a tense political situation.

The measure serves as a direct challenge by lawmakers to Trump’s history of exhibiting greater leniency towards Saudi Arabia despite the kingdom’s role in the war on Yemen, the growing civilian death toll there, the displacement of 3 million people, the deaths of 85,000 children and a famine which has touched some 14 million.

The Trump administration’s response to the brutal murder of Washington Post journalist Jamal Khashoggi at a Saudi consulate in Turkey last year also exacerbated criticism that the president places too much importance on America’s strategic alliance with the Saudis while failing to establish a clear position of moral or ethical authority.

This is the second time the resolution has come before the Senate.

It passed 56-41 in the Senate in December but then-Speaker of the House Paul Ryan, a Republican, refused to take it up. Current Speaker of the House Nancy Pelosi, a Democrat, picked the resolution back up in January once the new Congress was sworn in.

Though the House ultimately passed the resolution in February, an inadvertent procedural issue stopped it from being sent to a full vote in the Senate.

“The reports of abuse and torture are alarming and it is in the interest of the United States to put as much political pressure on the parties to end this conflict as soon as we can,” he added.

The bill, which invokes the War Powers Resolution of 1973, is sponsored by a bipartisan group of lawmakers, including Independent Vermont Senator Bernie Sanders, Republican Senator Mike Lee of Utah and Democratic Senator Christopher Murphy of Connecticut.

“I’m proud to represent a strong Yemeni American community in Michigan and I will continue standing with them to ensure every step is taken to alleviate the suffering Yemenis have been forced to endure for too long,” Peters said in a statement released following the vote.

“The war in Yemen has been a heartbreaking humanitarian catastrophe that has resulted in disease, famine, death and families being split apart,” Peters added. “Unfortunately, Saudi Arabia has consistently proven that its military coalition has only made worse an already devastating conflict. More arms sales and military support from the United States will not end this war. It is clear that – after years of war – a peaceful dialogue is the best solution to alleviate the human suffering in Yemen.”

Several Republican lawmakers, including Dan Sullivan of Alaska and James Inhofe of Oklahoma, decried that premise.