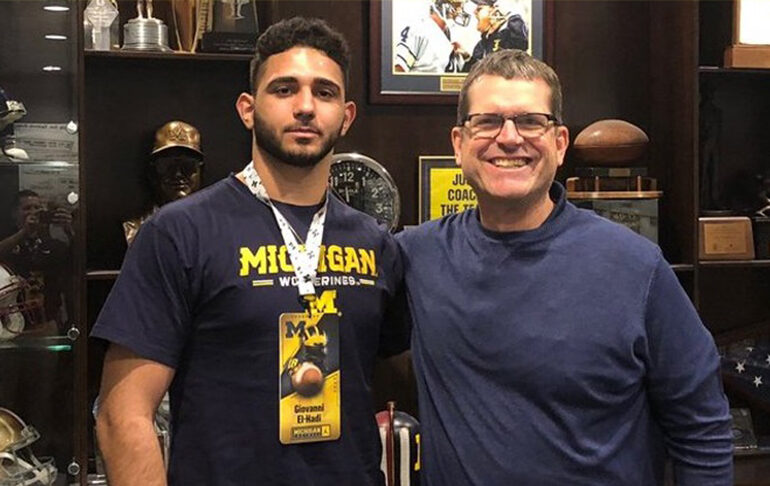 UTICA — The University of Michigan received its first football commitment for the class of 2021 earlier this month, as Sterling Heights Stevenson High School offensive lineman Giovanni El-Hadi announced that he had accepted a scholarship offer from the Wolverines.

The 6′ 6″, 280 lbs. El-Hadi chose to commit to the Wolverines immediately after receiving a scholarship offer on Sunday, March 17. He first caught the attention of top college football coaches following an excellent performance against several older players at a recent Rising Stars camp, after which national recruiting analyst Allen Trieu picked him as a “name to watch.”

He is expected to be listed by recruiting sites as a four-star ranked prospect (out of five possible stars), and a top 5 ranked player in the state of Michigan by the time the class of 2021 rankings come out.

The football star announced his commitment to the Wolverines on his Twitter account, along with a picture of Coach Jim Harbaugh.

“Thanks to all the colleges that offered me to play football at the next level,” El-Hadi said. “I’d like to say that I will be verbally committing to the University of Michigan to continue my academic and athletic career.

“Thank you to everyone for the love and support on this journey so far,” he added. “To all the coaches that helped me prepare and get to this moment is a blessing…To my family and friends that were with me through thick and thin, I couldn’t be anymore grateful for their love and support. Thanks to all the colleges that offered me to play football at the next level.”

El-Hadi is said to be a highly athletic prospect who already shows good strength as a young offensive lineman. He also had scholarship offers from Central Michigan, Indiana, Iowa and Penn State.

The University of Michigan has the most wins of any college football program all-time with 953, but its top rival Ohio State is catching up, with 911 wins as of the end of the 2018-2019 season, good for second place all-time.