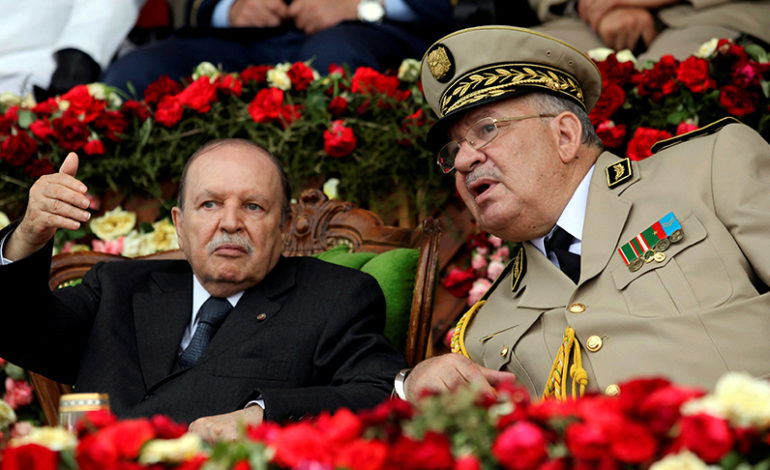 Algeria's President Abdelaziz Bouteflika gestures while talking with Army Chief of Staff General Ahmed Gaed Salah during a graduation ceremony of the 40th class of the trainee army officers at a Military Academy in Cherchell 90 km west of Algiers, Algeria June 27, 2012. -REUTERS/File Photo

ALGIERS – Algerian President Abdelaziz Bouteflika will resign before his mandate ends on April 28, state news agency APS said on Monday, bowing to weeks of mass protests and army pressure seeking an end to his 20-year rule.

There was no immediate reaction from leaders of the protest movement that has buffeted Algeria, a major oil producer, since Feb. 22. Many protesters want a new generation of leaders to replace an elderly, secretive ruling elite seen by many as out of touch and unable to jump-start a faltering economy hampered by cronyism.

In a sign that protesters might demand more changes, most opposition parties rejected a new caretaker cabinet appointed by Bouteflika late on Sunday, saying the prime minister was too close to ruling circles.

APS said Bouteflika, who is 82 and in poor health, would take important decisions to ensure “continuity of the state’s institutions” before stepping down. It did not spell out a date for his departure or give more details immediately.

Under Algeria’s constitution, Abdelkader Bensalah, chairman of the upper house of parliament, would take over as caretaker president for 90 days until elections are held.

Bouteflika, rarely seen in public since he suffered a stroke in 2013, at first sought to defuse the unrest by saying on March 11 he was dropping plans to run for a fifth term.

But he gave no timetable for his exit, advocating a national conference on reforms to address the outpouring of discontent over corruption, nepotism, economic mismanagement and the protracted grip on power of veterans of the 1954-62 war of independence against France.

Bouteflika’s hesitation further enraged protesters, spurring the powerful army chief of staff to step in by proposing last week to implement a provision of Algeria’s constitution under which a constitutional council would determine whether Bouteflika was still fit to govern or allow him to resign.

But Bouteflika signaled late on Sunday that he was on his way out when he appointed a caretaker cabinet headed by interim Prime Minister Noureddine Bedoui. An interim leader cannot appoint ministers under the constitution.

Central Bank Governor Mohamed Loukal was named finance minister, while the former head of the state power and gas utility, Mohamed Arkab, will take up the energy portfolio. OPEC member Algeria is a major oil and natural gas exporter.

Most opposition parties rejected the cabinet because they see Bedoui as too close to the ruling elite. They also say past elections he supervised as interior minister were not fair.

Several opposition leaders on Sunday supported the army chief’s proposal that Bouteflika’s capacity to govern be assessed under article 102 of the constitution.