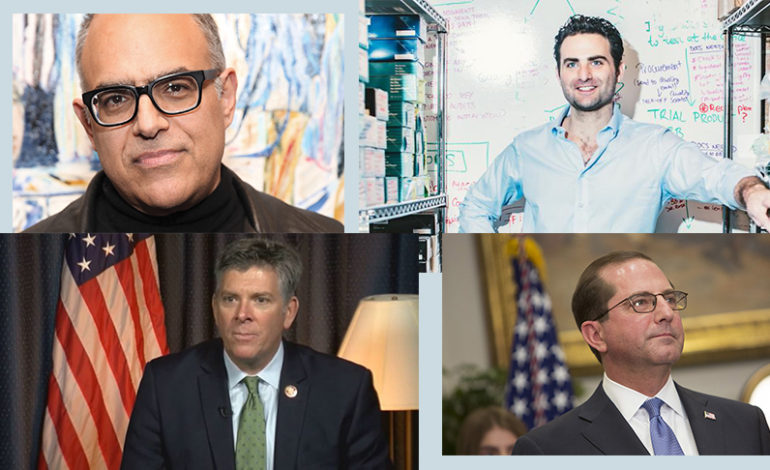 Four Lebanese Americans to be honored at ATFL 2019 Gala

WASHINGTON, D.C. – Celebrating 30 years of strengthening the American-Lebanese relationship, the American Task Force for Lebanon (ATFL) will honor four exceptional American leaders of Lebanese heritage who have made significant contributions in their fields at its annual Gala Awards Night held April 10 at the Fairmont Hotel in Washington, D.C. Honorees are Alex M. Azar II of Indiana, secretary of the Department of Health and Human Services; Rep. Darin LaHood of Illinois; Peter Rahal of Illinois, CEO and co-founder of RXBAR and David Yazbek of New York, an Emmy, Grammy and Tony award-winning writer, composer, producer and lyricist.

Azar was sworn in as secretary of the Dept. of Health and Human Services in January 2018 and spent his career working in both the public and private sectors, as an attorney and in senior leadership roles focused on advancing health care reform, research and innovation. From 2001 to 2007, he served at Health and Human Services, first as its general counsel and then as deputy secretary. During his time as deputy secretary, Azar was involved in improving the department’s operations; advancing its emergency preparedness and response capabilities as well as its global health affairs activities and helping oversee the rollout of the Medicare Part D prescription drug program. In June 2017, LaHood was accompanied by the ATFL on a trip to Lebanon, where he had the opportunity to meet with leaders and have a firsthand look at the issues facing the country.
Both Azar and LaHood will receive the Philip C. Habib Award for Distinguished Public Service. The award recognizes exceptional achievement in public service. Peter Rahal of Illinois, CEO and co-founder of RXBAR

Yazbek will receive the Ray R. Irani Lifetime Achievement Award in recognition of his exceptional professional and personal achievements.

The ATFL Gala draws more than 400 guests, including high-level administration and Congressional officials, as well as ambassadors and international business leaders.