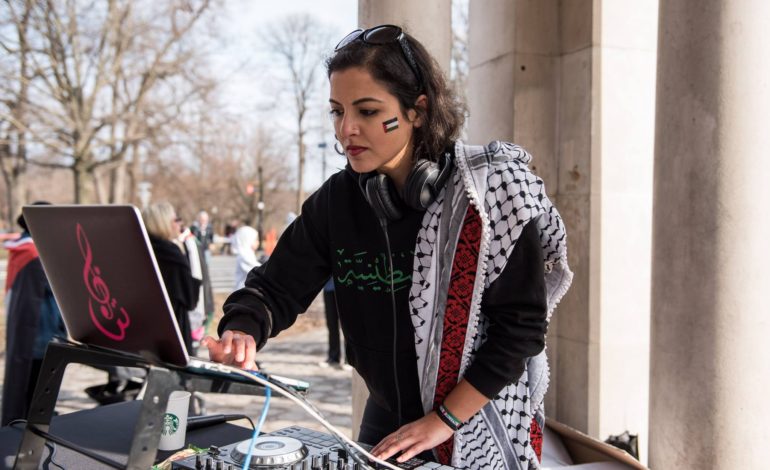 BROOKLYN, NY — Fatin Jarara, or DJ Fatin, is a Palestinian immigrant and a unique voice in the New York City DJ scene.

Jarara recently DJ-ed on March 30 for the United Nations Relief and Works Agency’s Gaza 5k and dabke party at Prospect Park in Brooklyn.

She said she normally focuses on private events such as weddings, engagements and bridal showers in and beyond the Arab community there.

“I use a lot of Arab pop and traditional stuff, or dabke,” she said. “Depending on the clients I’m working with I’ll put on what they ask. Of course there’s times when they want Western music, Latin music or music from different parts of the world. ”

She said she’s been working as a DJ in the community for a little over 10 years.

“I never really intended it to be something I would do for a long time, to be honest,” she said. “It just happened kind of by accident.”

Jarara said her interest in music and media came when she was a part of a group called “Arab Women Active in the Arts and Media”, which teaches young women and girls community-organizing and media skills.

She said her sister had originally taken up DJ-ing and found she didn’t enjoy it as much as she’d hoped.

“She didn’t like it that much,” Jarara said. “I think she realized it was tough because it meant being a people person, or dealing with criticism. Even if you were doing a good job, you’re not going to please everybody sometimes.”

Jarara said she took on an event for a friend that her sister didn’t want to play.

“I told her, ‘I’ve seen my sister DJ. It doesn’t seem too hard, I can help if you want,’” she said. “It really took off from there. Other friends and people would see me and hire me and it just kept going in that direction.”

She said she thinks the reason she’s worked so long in the industry is because she’s a woman.

“There is a big need for women in music and entertainment,” Jarara said. “A lot of the functions are women-only and they don’t want men to be serving at them.” She said there’s probably only around 10 woman DJs in the New York area.

“It’s kind of crazy how we’re all busy,” she said. “And I can tell because of the [immigrant] community, the demand is so big.”

According to New York City’s annual report, the city has 3.1 million immigrants overall, which is more than a third of the city’s population.

Jarara said she was almost 10-years-old when she first immigrated to New York City.

“I’ve spent all of my U.S. life in New York City,” she said. “I like DJ-ing here. It’s not easy, to be honest. I actually know how to drive, which is not something that a lot of New Yorkers do know how to do. I know that I’m always going to have to worry about parking.”

She added that New York offers a lot of community.

“You just find so many people that are from all kinds of cultures,” she said.

Jarara said she DJs for many different cultures, including the South Asian, Afghan and Turkish communities. She said the mixture of communities “jazzes it up” and that knowing about the music in the cultures she plays for is helpful.

“It’s helpful when you know the language, too,” she said. “Some I just know their music, but not the language that’s being spoken.”