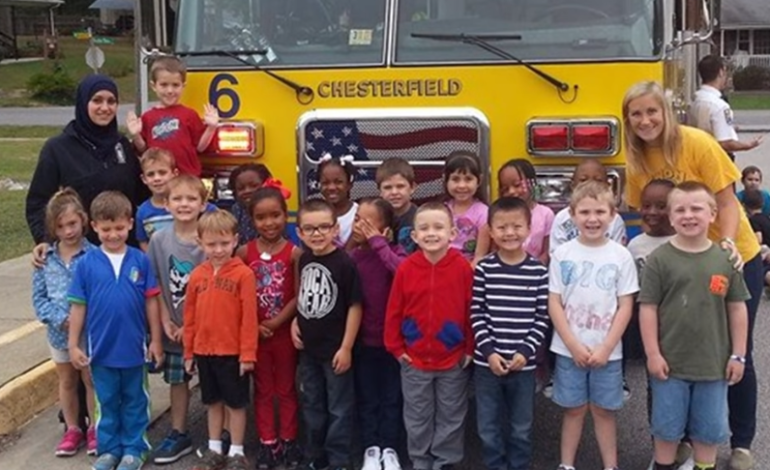 CHESTERFIELD COUNTY, VA — Life as a firefighter is far from easy, but for Katie Amin of Chester, Virginia, her job comes with an additional challenge that few others have had to deal with: She also happens to be an Arab American Muslim woman with a hijab in an area where it’s not especially common.

But over time, Amin, a 26 year-old volunteer firefighter for Chesterfield County, has settled in nicely and built a lasting bond with her co-workers through her demanding yet highly satisfying job.

“They’ve embraced it now; they’re the ones that actually defend me anytime anyone says anything inconsiderate or negative,” Amin told The AANews. “Really it’s crazy how we got together.”

Amin, who also works as a loss prevention manager for a nearby Amazon facility, has been featured in a TEDx GraceStreetWomen talk in Richmond, Virginia, during which she shared the importance of embracing community service.

As one of the few Arab and Muslim American women firefighters in the country, Amin said she encourages everyone to volunteer, regardless of their culture, race or religion. Her department is a diverse one, despite its rural Virginia setting.

“I love what I do with my job and I love volunteering,” she said. “Volunteering is not just about fighting fires; it’s also about being a community advocate, working with the community to better their awareness and to teach them how to get prepared for disasters and how to react to a fire, how to prevent fires.” Amin’s family moved from Jerusalem to the U.S. when she was 13-years-old and she struggled to fit in before finding her passion. Her training was intense, but the reward at the end was well worth it — and it had nothing to do with money.

“I was talking to new recruits the other day, saying they were going through some rough times,” she said. “I remember I didn’t know if I could do it (at first), but the day you push through it, the drive home is one of the most meaningful feelings… If you want to get through tough times, go through fire school; it is so rewarding.”

Now, she spends her days as a volunteer firefighter, getting to know fellow community members, strengthening bonds and serving in a variety of ways. Her duties include responding to calls ranging from cardiac arrests and elderly citizens in need of CPR to fire-related incidents. She also helped spearhead a program to train more residents in CPR, something sorely needed.

She said most fire stations are flexible when it comes to hours and work locations. They allow many volunteer firefighters to serve their community working from home, an important detail for anyone who may be interested but may be tied up with work or family obligations.

The journey has been difficult, but the benefit of being able to serve and become an integral part of her community has been priceless. “Be proud of who you are and help people who are different from you to make this world a better place,” Amin says in her TEDx talk, describing the Arabic concept of amanah. The closest English translation means “fulfilling or upholding trusts.”

Amin’s current areas of focus include teaching CPR skills; educating residents on what firefighters do, including simulated training exercises, and working on an interfaith project to help local emergency agencies respond more quickly to potential incidents at churches, mosques or synagogues in light of the recent New Zealand terrorist attacks.

Her message to both the Arab American world and the world at-large is a simple one: Volunteering has always mattered and it always will, even in a world where money is often the only focus.

“I encourage people to go volunteer,” she said. “It doesn’t matter your culture or religion; sometimes you have to be the first one to do (it).”

Watch her TEDx talk “Finding Yourself Through Community Service” below: