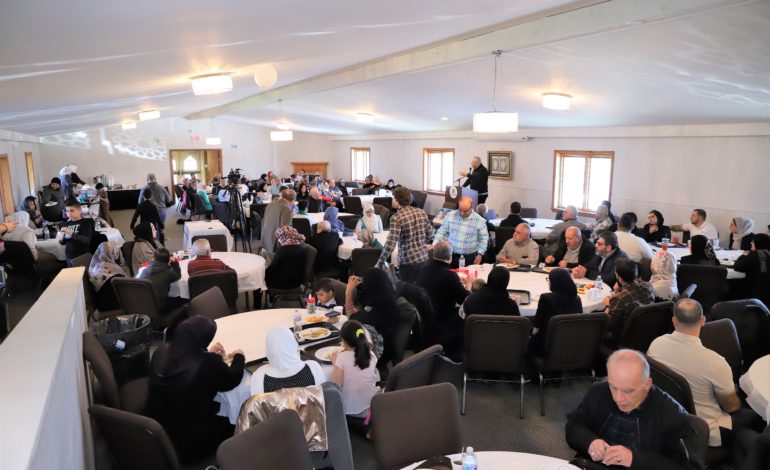 Osama Siblani, publisher of The Arab American News speaking at the event. - Photo by Abbas Shehab

DEARBORN HEIGHTS—The Qana al-Jalil Committee, along with the Congress of Arab American Organizations (CAAO), held its annual Qana Memorial event on Sunday, April 21 at the Islamic Institute of America in Dearborn Heights, in remembrance of two of the most forgotten and devastating war crimes in recent world history.

The Qana massacres, which took place on April 18, 1996 and July 30, 2006, respectively, happened in Dearborn’s sister city of Lebanon at the hands of Israeli forces.

A total of 106 civilians died as a result of the first attack, during which victims took shelter in a clearly-marked U.N. compound that was intentionally shelled by Israel according to the results of a U.N. investigation.

The 2006 attacks took the lives of 56 people including 32 children, according to the Lebanese Red Cross. The Human Rights Watch organization condemned Israel afterward citing its “consistent failure to distinguish combatants from civilians” as a “war crime.”

At this year’s event, speakers included Haidar Bitar, the father of Dearborn’s Hadi and Abdulmohsen Bitar, who were killed in the attacks, and Osama Siblani, the publisher of The AANews and co-founder of CAAO, who has spoken at the event each year.

“We have made a commitment as a committee and as a community that we will not forget the victims of those two massacres committed in 1996 and 2006,” Siblani said, thanking the committee for continuing the tradition each year.

He spoke about the connection between the March 15 New Zealand mosque attacks and the April 21 Easter Sunday attacks on churches in Sri Lanka.

“It is important to remember that there is an evil force out there that is trying to shed blood, it doesn’t matter whose blood is being shed,” he said. “We need to remember what is happening around the world and what’s happening in our country, too…Christians and Muslims alike were murdered, by the same people who are evil.”

Siblani also spoke about the importance of keeping the community united in light of recent national and international developments, including President Trump’s attacks on one of the first two Muslim Congresswomen in U.S. history, Ilhan Omar, and other inciteful comments about Islam.

He said that some people in positions of power are working “very, very hard” to divide the community in order to take away its growing strength.

“We have a president that is going out of his way to characterize our religion of Islam as the enemy of America and humanity,” Siblani said. “And he is the leader supposedly of the free world, inciting violence against us not only here but around the world.”

Siblani has said in past Qana commemoration events that unity and defending the community in times of hardship and controversy are two areas where the Jewish community has excelled, an example Arabs and Muslims can learn from in trying times.

It’s also important for the community to manage their disagreements, Siblani said, especially in a world where oppressors seek to inflict harm or division on the community.

“If we disagree we still have to manage our community,” he said. “We have to agree to disagree, things we disagree about, put it on the side…The things that we agree on are much bigger.”

The Qana al-Jalil committee, which has been in cooperation with the Congress of Arab institutions for more than 20 years, commemorates the massacres each year.