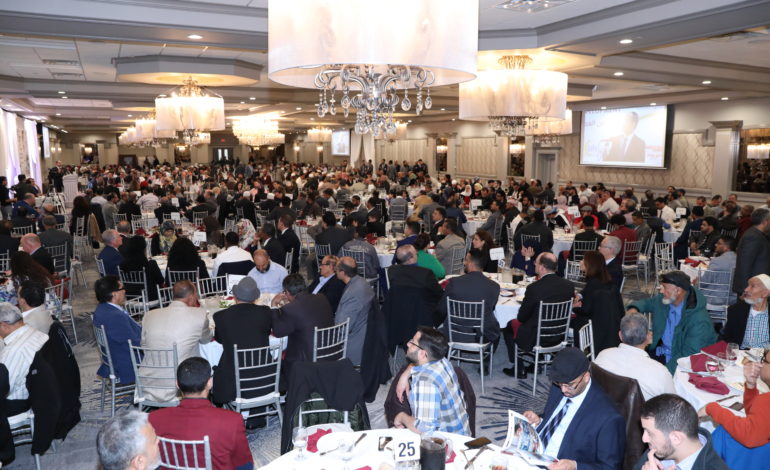 DEARBORN – The American Moslem Society celebrated 80 years of faith and serving the community this past Friday, highlighting the importance of staying united in the face of bigotry and ignorance.

The AMS, also known as the Dearborn Mosque, was built in 1937 and is the second oldest in the United States.

Imam Hamood Afeef has been the head imam at the society since 2005. He thanked those in attendance and reiterated the mosque’s mission of service.

“Eighty years ago the Moslem Society was founded in the city of Dearborn, signaling a new era for the Muslim community, state and country,” he said. “The AMS helps raise leaders who understand the peaceful nature of our faith, maintaining a balanced life and avoiding all forms of violence, ideologies and extremism.

“We take pride in being Muslims and Americans and we appreciate your joining us today and celebrating 80 years of service and development to our community.”

Governor Whitmer and U.S. Senator Debbie Stabenow offered messages of congratulations, thanking the mosque for its many years of community service and outreach.

Community outreach was a main theme of the keynote speech from Dalia Mogahed, the director of research for the Institute for Social Policy and Understanding. She has worked diligently to uncover vital statistics about the American Muslim community and to share them with political leaders and citizens, to combat the false narrative that Muslims are not true Americans.

“The two realities are so often pitted against each other and said to be incompatible, yet I stand before you today as a proud Muslim American, a proud American Muslim to tell you that these identities are mutually enriching,” she said.

Mogahed said her understanding of the American Muslim identity and history of contributions was “transformed” after reading a book about civil rights leader Malcolm X.

“I realized our faith played a part in transforming my country,” she said. “I realized that people who shared my faith helped to free this country…There has never been an America without Islam.”

While at ISPU she helped to educate people on American Muslims through “objective, rigorous research.”

The largest single group of Muslims in the U.S. identifies as Black, while Arab Americans make up about 18 percent of the population, she said. American Muslims are also the youngest community in the country with an average age 20 years younger than the average American.

The community is highly educated and skilled at creating jobs as well.

American Muslims hold many important positions. For example, they comprise less than 3 percent of the Michigan population but make up 15 percent of the doctors in the U.S., Mogahed stated.

She shared with the audience the importance of combating ignorance and Islamophobia with facts.

“So what do we do?” She asked, rhetorically. “We all have a role; every single one of us in this room has a role in defending and strengthening our democracy.”

She added that the time is now to share the American Muslim story with others.

“We are done condemning; we are done telling people what we are against…It’s time we show them what we’ve built, what we’ve given, what we’ve sacrificed for the betterment of our country.

“So educate yourself about the contributions of this community and tell the world; be an ambassador for the facts.”

Voting in the upcoming 2020 presidential and other elections is also paramount, Mogahed said.

“With all that is at stake in this election, if you are eligible to vote and you don’t, then God help you, God forgive you; every single one of us has to register to vote and we have to go out and vote.”

She added that people should not be intimidated and that strength in numbers is key going forward.

“Racists are a fringe,” she said. “Don’t let them convince you they’re speaking for all Americans because they’re not. Don’t be afraid; reach out and build relationships, build coalitions to save our country. Thank you!”

More information about the mosque can be found on its website at //amsdearborn.org.