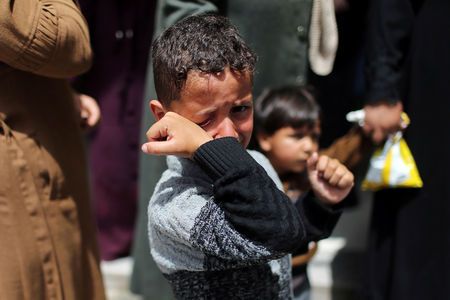 A relative Hani Abu Sha'ar, who was killed in an Israeli air strike, mourns during his funeral in Gaza Strip on May 6. - REUTERS

GAZA – After two sleepless days and nights of Israeli shelling and Palestinian rocket fire, Gazans on Monday faced a first day of Ramadan overshadowed by funerals and the grim task of pulling bodies from collapsed buildings.

As dawn brought a ceasefire of uncertain duration, few Palestinians in the impoverished coastal enclave were focusing on the sundown feast that is traditionally the highlight of the day during the Muslim holy month.

At Gaza City’s largest hospital, Shifa, relatives of the 21 Palestinians killed on Sunday – including 12 civilians – arrived to collect bodies for burial and prayers.

Outside, workers set about rebuilding power and phone lines devastated by the Israeli bombardment, which also razed entire tower blocks, leaving rubble strewn across the ground.

Other government employees lined up at banks to draw out money they had been unable to collect during the hostilities.

The Israeli military said its tanks and warplanes had hit 350 Hamas and Islamic Jihad targets in Gaza, including a cross-border tunnel, militant training camps and places used to store weapons.

An Israeli military spokesman said the Palestinian militant groups Hamas and Islamic Jihad had fired around 690 rockets toward Israel, killing four Israeli civilians. Calling the barrage “reckless and coordinated”, the military said 240 of the rockets had been intercepted by Israel’s air defenses. Palestinians stand around the bodies of a four-months-old girl Maria Al-Ghazali, her father Ahmad and mother Iman Al-Ghazali, laid inside a coffin, who were killed in a late Sunday Israeli missile strike during their funeral in town of Beit Lahiya, northern Gaza Strip, Monday, May. 6, 2019. AP

In the Sheikh Zayed neighborhood of northern Gaza, residents were in shock a day after an Israeli air strike killed six people. The four apartments wrecked in the five-story building were among 600 housing units left destroyed or damaged, according to the Ministry of Housing.

“I have never seen in my life more horrifying images than I saw yesterday. I saw dismembered bodies, burnt up bodies,” said 60-year-old Ziyad Hammash, who lives in the building across the street.

Sumayya Usruf, whose cousin, husband and four-month infant child were killed in an apartment in the northern Gaza Strip, said: “This is a very tough Ramadan. We will not feel festive.”

As she spoke, dozens of men brought the body of the baby home for farewell. Inside the ambulance was a coffin filled with flesh and body parts.

Israel accused Gaza’s ruling Hamas of trying to pressure it into easing long standing restrictions on the movement of people and goods out of Gaza, which Israeli authorities say is necessary to stop arms reaching Hamas.

In the West Bank, Prime Minister Mohammad Shtayyeh – whose Western-backed Palestinian Authority is a bitter rival of Hamas- said it would send humanitarian aid and food to Gaza.

But in Gaza there was pessimism that the latest ceasefire would be a long-term solution.

“This round is over but I am afraid another will soon begin. We aspire to a day when nothing of this will happen,” said 55-year-old Adel Mohammad-Ali at one funeral.