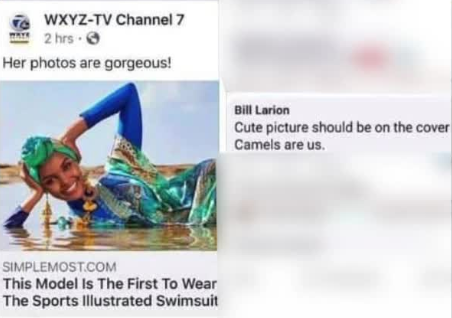 DEARBORN — A part-time employee for the city of Dearborn named Bill Larion has been fired for a racist Facebook post against Arabs.

“Bill Larion no longer works for the city of Dearborn,” the city said in a statement.

The city did comment on why Larion was fired, but the Detroit Free Press obtained a copy of a letter sent to him, which stated that he failed to live up to the city’s mission. His original decision to claim that the post was hacked before admitting he did in fact make it his also factored into the firing, the letter said.

Larion, 58, worked as a part-time surveyor for the city of Dearborn. He referred to Muslim model Halima Aden as a camel in a comment on a WXYZ Channel 7 post on Saturday.

“Cute picture should be on the cover of Camels are us,” Larion said.

“He feels bad about it,” Ed Zelenak, Larion’s attorney, said. “It’s a horrible mistake. He feels awful and great embarrassment…very childish and stupid.

“He apologized,” Zelenak continued. “He expressed remorse…It’s clearly out of character for him.”

Prior to Larion’s apology, Dearborn Mayor Jack O’Reilly called the remarks “offensive” and said that he directed a multi-department city investigation into the source of the comments.

On Monday, he had told WXYZ-TV that his account had been hacked, that the post wasn’t his, a report from the Detroit Free Press said. But at the Tuesday meeting, he admitted that he was behind the post, his lawyer said. He said he was at a tennis match when he wrote the comment.

Dearborn has a population of about 46 percent Arab Americans and a large percentage of them are of the Islamic faith.

“Immediately, he felt a sense of revulsion and he took it down,” Zelenak said.  “It was an inexplicable, asinine impulse to do something he’s going to regret for the rest of his life.”

O’Reilly said in Monday’s statement that he has “zero tolerance” for the type of language used in the comment, and said it violates the city of Dearborn’s values and practices, as well as the expectations for its employees.

“It violates the very heart of our mission statement, which is that we must earn the public’s trust in everything we do,” O’Reilly said.

The investigation is still under way, but Larion was asked to report to work on Tuesday.

“He’s prepared to do whatever they ask him to do,” Zelenak said. “This is just a first step in him trying to rehabilitate.”