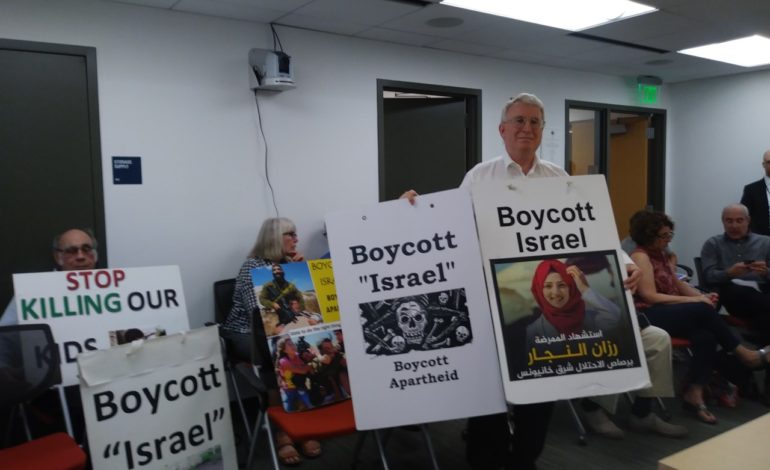 ANN ARBOR — Nearly a month after scoring a breakthrough in their quest for a boycott resolution of U.S. military support for Israel, local activists were rebuffed by the Ann Arbor Human Rights Commission on Wednesday night, which refused to discuss the proposal.

“This is a commission of killers!” Ann Arbor resident Mozhgan Savabieasfahani said as she was escorted out of the room during the meeting.

Savabieasfahani and fellow Ann Arbor resident Blaine Coleman, along with other supporters, have been attending Council meetings for decades, pushing for a boycott against the Israeli military occupation of Palestine.

Their goal was to get the city to adopt a resolution urging the federal government to end military support for Israel. In 2003, the commission recommended a similar message to the City Council, but it was never voted on.

The protesters say that resolutions like the one they propose helped to end apartheid in South Africa, and have been attending meetings carrying signs urging for a boycott in a spirited attempt to get their message approved.

“The very least we can do is cut off military aid to a government of butchers,” Savabieasfahani said at Wednesday’s meeting. The protesters held signs showing soldiers bullying a Palestinian woman in the occupied territories and others.

City attorney Stephen Postema said the Israeli-Palestine conflict is not within the scope of the commission’s mandated duties, but he did say that the City Council could request the commission take up a specific, more general topic such as U.S. aid to foreign countries, Mlive.com reported.

His recommendation was unanimously approved by commission members, after which the protesters began shouting, releasing years of frustration at the officials’ continued refusals.

Postema added that City Council can still vote on a resolution on the topic without commission recommendations in the future.

A video of the meeting, including various tense moments, can be seen here.