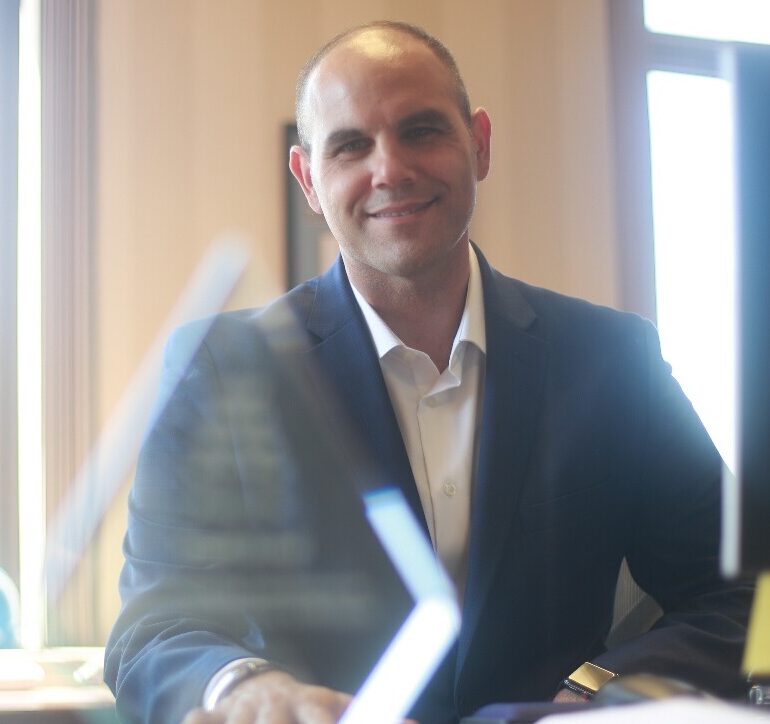 Khalil Rahal at his office in the Guardian Building downtown. Photo via Zaineb Hussein/Wayne County

DETROIT — Wayne County, Michigan’s most populous, has undergone a series of dramatic economic changes since staring down bankruptcy in 2015, culminating in a 2018 annual general fund surplus of $146.6 million under the leadership of County Executive Warren Evans.

Rahal’s leadership has earned him three major awards in the past year and a half, including the prestigious MEDA (Michigan Economic Developers Association) Medalist of the Year Award earlier this month.

Rahal didn’t know he was nominated for the award until receiving a text from David Schreiber, the business development manager of the Wayne County Economic Development Corporation (EDC), who nominated and accepted it on behalf of his colleague.

“Wayne County is becoming a player again in economic development, but in a collaborative way that builds around the assets of its 43 distinct communities,” Schreiber said at the August 15 event.

“No one works harder than Khalil and it’s paying off. Wayne County is open for business and a strong partner in a way it hasn’t been in quite some time and investors are taking notice. That’s good news for the region and state.”

The award was given to, “an economic leader demonstrating a commitment to the profession of economic development, his dedication to the growth of his or her community, and (with) a strong record of achievement over his or her career.”

The significance of the award was not lost on Rahal.

“This award came from my peers in the field of economic development,” he said. “The last year and a half has been very special for me.”

Rahal was also named to the Crain’s 40 Under 40 list for Metro Detroit business leaders and 50 Names to Know in Government List for 2019.

Under Rahal, Wayne County has refocused its efforts on supporting existing businesses, building a world-class logistics hub and putting properties back into productive use. He’s led efforts to sell the former McLouth Steel Plant in Trenton, putting it on a path to productive use, and is overseeing a project to revitalize three former Ford Motor Company Village and industry mills.

He’s managed to fill the iconic Guardian Building where he works downtown to 95 percent capacity, making it financially solvent, while continuing to make economic strides throughout the county.

In Dearborn Heights, he engineered the sale of the Warren Valley golf club to the city for $1.8 million, a deal Rahal said helped save money for both the county and the city.

A revamped team has helped make these and other deals possible. “We’ve had to completely redo the Economic Development Department here,” Rahal said.

“At the time (Evans) took over in 2015, we were facing some really difficult financially circumstances…Today we have a brand new department; it’s got three divisions, we’ve got staff and it has been rebuilt to the point where we’ve accomplished a lot of great projects.”

For Rahal, who once lived next to Hines Park in Dearborn, a vision of a more connected Detroit is among his long-term plans.

“Hines Park directly ends in Dearborn and one of the things about the region is, there’s no way to get from the east side of the county to the west side or vice versa in a non-motorized way; there’s no connectivity,” Rahal told The Arab American News in an interview last week.

He envisions future projects, including bike paths from Detroit to the end of Hines Park, with new developments including a rooftop restaurant, museums and the revitalization of the historic mills in the area, which are steeped with historical ties to Henry Ford, Thomas Edison, “Rosie the Riveter” from World War II and others. Rahal said he hopes to create public-private partnerships that will allow others to take over the historic mills, perhaps a few years down the line, to help turn them into exciting new historical attractions.

“One of the visions the county executive has is for helping us connect one another,” he said.

Evans brought on Rahal to lead the county’s economic development efforts in 2015.

“He’s been an amazing mentor,” Rahal said. “The way I would describe Mr. Evans is, a ‘they don’t make them like they used to’ kind of thing.

“He’s been an amazing leader and I’ve learned a lot under his tutelage; he’s given me the freedom to be able to take on projects, some of which are controversial, but for the right reasons.”

Rahal’s experience has enabled him to become a better executive himself, as evidenced by his unprecedented recent string of awards. His peers have also taken notice, as has Evans.

“As the county continues to rebuild, Khalil’s job is to protect property values and grow the tax base so our 43 communities can thrive,” Evans said.

“He’s done a phenomenal job. Whether it’s putting properties on a path toward revitalization or positioning the county to grow as a world-class logistics hub, he’s been essential to our progress.”

“You can’t say enough about what putting properties back into productive use does for the county’s fiscal well-being and quality of life. It’s critical to protecting and growing property values and positioning communities to prosper,” said Wayne County Commissioner Sam Baydoun.

“There is a natural tug-of-war that occurs in negotiations that can easily kill a deal,” he said.

“While Khalil is a relentless advocate for the best interests of the county, he’s fair and reliable, which is essential to bringing complex transactions like McLouth to fruition.”

Upcoming challenges for Rahal and the department include investing in and paving the way for new developments in public transportation in the region, which he calls the biggest key for fostering economic growth in the region.

In a world that is becoming increasingly more connected, Rahal continues to push for Metro Detroit to take on a leadership role in logistics and data as well.

“A lot of things will require the transfer of a lot of information in the future like data research,” he said when asked about the advice he would give to local entrepreneurs. “And a lot of it is going to be an educational process, so don’t be afraid to learn what you don’t know.

“The world is going to be changing very, very quickly and there are very few experts in that space.”

For more information on MEDA, visit its website at https://www.medaweb.org/.