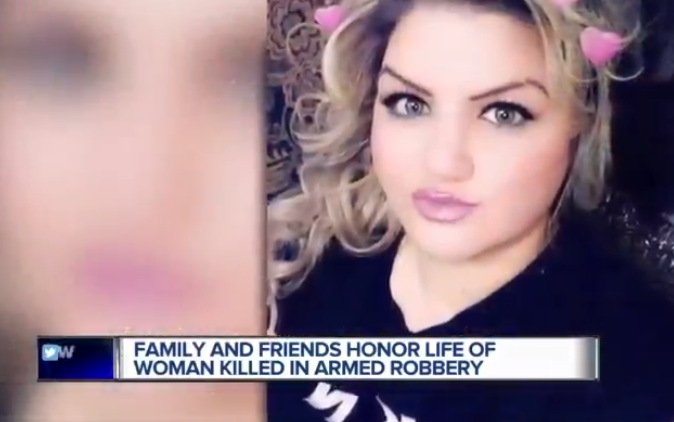 Saja Al-janabi was described a selfless person who always put others first. Photo via WXYZ/Screen capture

DEARBORN — A 29-year-old woman was shot and killed on Friday night near the 7800 block of Bingham Street, Dearborn police said.

Police are currently searching for a suspect vehicle believed to be connected to the shooting, WXYZ-Detroit reported. The shooting took the life of Saja Al-janabi.

On the night of the shooting, officers rushed to the area of Steadman and Morross after reports of armed robbery. While conducting the investigation, they were called to Bingham Street after a woman was reported shot. The suspects ran off from the scene, WXYZ said.

Ali Al-janabi texted his sister asking if she was close to his location around 10 p.m. He said she texted back right away that she was just outside his door.

After asking which door, his sister did not text back. He says that’s when he discovered his sister, face covered in blood with her legs inside the car and her body half out. He called 911 and began praying.

“I pulled her out from the car, talked to her, tried to keep her breathing, but she couldn’t make it,” Ali said, adding that his sister took her final breath in his arms.

Two men suspected of killing his sister robbed at least two other people nearby at gunpoint, police said.

The family’s father was killed in Iraq, and Ali Al-janabi’s mother moved their family to the United States where she thought they would be safe.

“I can’t believe this is America. We left our houses in Iraq, Middle East to come here, find freedom!” Al-janabi told WXYZ.

Saja was the middle child in a family of six kids. Al-janabi said his sister was hard working and generous.

“She was a good person, she feed you before she feed herself,” he said. “All I know, I just want justice for my sister.”

Saja Al-janabi was laid to rest on Monday at Maple Grove Cemetery in Westland, surrounded by friends and family members, where attendees prayed for peace and for the killers to be found.

A $2,500 reward was still being offered as of Monday night by Crime Stoppers of Michigan for any information leading to an arrest. Anonymous tips to the organization may be left by calling (800) SPEAK UP.

“The Dearborn Police Department sends its condolences to the family and friends of the victim and will aggressively investigate this crime utilizing all available resources,” said Police Chief Ron Haddad. “We are urging the public to come forward and provide information to help identify the suspects.”

A vehicle shown below is believed to be the suspect vehicle and was captured on multiple surveillance systems. The Al-janabi family has also set up a GoFundMe page to help with Saja’s funeral costs, which can be found by clicking here.